The exhibition gives a voice to contemporary Indonesian artists in expressing their concerns and reactions in the unsettling political situation of their native country. The work is an expression of the post-Suharto era 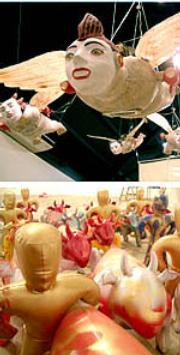 Indonesia, Southeast Asia's largest and most populous country, has experienced radical change at every level of society since the fall of President Suharto in the spring of 1998. Economic instability, ethic dislocation, geographic disintegration, communalism and political uncertainty all threaten the nation in ways that were unpredictable less than a decade ago. Yet as contemporary Indonesians grapple with each new crisis, the challenges they face are reflected in increasing openness in the press. And as society becomes freer, contemporary artists are reacting to a less controlled but ever more complex environment, in sophisticated and creative ways.

With reformasi, the largest and most comprehensive survey of Indonesian contemporary art shown in Singapore, this Sculpture Square initiated and organised exhibition seeks to give contemporary Indonesian practitioners a voice. Their work is sometimes radically innovative in concept or form, and their art, in the expression of their concerns and reactions to life as it unfolds in this unsettling world of challenge and promise, cannot fail to engage universal audience.

1. Apotik Komik: The subversive Jogjakarta group of street artists who will be producing site-specific outdoor work including banner art and a multi-media installation.

2. Agus Suwage:
Painter and installationist, who will be showing a 15 metre mural on canvas with a social theme.

3. Arahmaiani:
The radical performance artist who is making a sewn installation consisting of political flags re-configured to form a wedding dress, the work a critique of Indonesia's current political and geographical fragmentation.

4. Bunga Jeruk:
A painter and 3-dimensional artist, her works are considered unique among contemporary Indonesian Artists. She will display an installation piece entitled ''Animaux Binatang''.

5. Popok (Tri Wahyudi):
Cartoonist and painter, who's works reflect a definitive social theme, will be presenting banner art entitled ''View the cause, harvest the consequence'' and ''Eternal Friendship'''.

6. FX Harsono:
An established artist who combines painting with photography and performance art to deliver his obeservations and criticism of society and environmental issues.

8. Heri Dono:
An established artist, who is also trained in the art of wayang kulit, Heri Dono is interested in intitiating interactive processes and engages his audiences by inviting controversy and conveying meaning. He will be presenting two pieces, ''Angels Fallen From The Sky'' and ''Wayang Lagenda''

9. Krisna Murti:
Visual artist who uses video and photgraphy to present satirical images of political instability in his country. Murti is a versatile practitioner who has fully grasped 21st century technology, exploiting it to give a disturbing yet universally engaging picture of his indigenous culture. Krisna Murti will deliver a 4 minute video presentation entitled ''Beach Time''

10.Tintin Wulia:
Film and video artist whose works on social and environmental issue have been featured in New York, Berlin, Amsterdam, Toronto and Indonesia. Her contribution for the exhibition are 2 digital videos entitled ''Where Do You Originally Come From'' and ''Everything's OK''.

11. Eko Nugroho:
Multi-talented painter, video artist and cartoonist, he has already held several well received exhibitions in Indonesia and Japan. He will be presenting a 9 minute video entitled ''The Breeders'', exploring issues of citizens' responsibility to the state.

12. Mella Jaarsma:
Dutch-born but having lived in Indonesia since 1984, Mella uses her Indonesian/Dutch identity as the foundation for her artistic investigation of Indonesian politics.

14. I Made Aswino Aji:
Following the bombings in Bali, the artist made this work, ''Bunga Duka'', as an exploration of his feelings of his grief. Not only were physical lives taken that day by the bombings, the socio-economic 'life' of the island was also extinguished. This work was originally exhibited in a well-known tourist cafe and art space in Yogyakarta only a few months after the incident. Its location and timing were poignant as the 'death' of tourism in Bali also heralded its 'death' in Yogyakarta.