One-Off Prototypes. A Rashid's consistently forward-looking work through very rare one-off pieces that never went to production but were frequently published. The gallery will be transformed into a total Rashid environment created with furniture and design prototypes from the decade between 1988 and 1998. 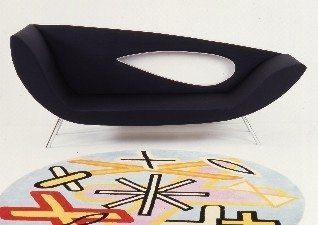 Sandra Gering Gallery is pleased to present our fourth solo exhibition with artist/designer Karim Rashid. The gallery will be transformed into a total Rashid environment created with furniture and design prototypes from the decade between 1988 and 1998.

In his furniture, rugs, and lamps from this period we see the essence of the spirit that has become associated with Karim Rashid designs around the world. As Rashid says:

â€œI believe furniture should not be obstacles in life but raptures of experience. I try to develop furniture and objects as De-stressers â€“ objects that bring enjoyment, not encumbrances, that simplify tasks, and increase our level of engagement and of beauty. Our lives are elevated when we experience beauty, comfort, luxury, quality, performance, and utility seamlessly together.â€

Through his curvaceous, biomorphic forms, luscious colors, and luxurious materials, Rashid creates objects of seduction; objects that announce themselves not as neutral workhorses, but as vehicles of pleasure. Rashid's individual aesthetic and beliefs about the power of design are so strong that his work is now instantly recognizable, whether the object is a sofa, perfume bottle, or pair of sneakers. The exhibition at Sandra Gering Gallery is a valuable opportunity to look backward on Rashid's consistently forward-looking work through very rare one-off pieces that never went to production but were frequently published. The pieces were hand made in Japan, Canada, Italy, and USA.

This exhibition will coincide with the opening of the first boutique dedicated to the designs of Karim Rashid: KARIM, located at 137 West 19th Street, NYC. The concept of the KARIM shop is to serve as a venue that will showcase the depth and breadth of Rashid's work, and that will exemplify Rashid's philosophy that design is in every aspect of living.

Evolution, a new monograph on the work of Karim Rashid, will be released by Universe Publishing in fall 2004. The book will feature heretofore unpublished drawings and personal sketches, and essays by Peter Stathis, Cristina Morozzi, Moby, and Philippe Starck. A book on Rashid's work by Marisa Bartolucci was also released in 2004 as part of the Chronicle Books series Compact Design Portfolio.

OLI SIHVONEN: The 3 x 3 Paintings -- 13 January - 12 February 2005
Sandra Gering Gallery will present paintings from Oli Sihvonen's series known as the 3 x 3 paintings.
The 3 X 3 paintings at first seem daunting because of their simplicity Â­ and the complexity of the idea behind them. The â€œ3 by 3â€ designation refers to their internal color relationships, not their size. Sihvonen (1921-1991) explored the concept underlying these works between 1975 and 1977, creating over forty canvases that express his idea with clarity and eloquence.