The Bing empire. The first comprehensive exhibition on the origins of Art Nouveau. More than 400 objects and works of art, a major exhibition on the emergence of the French Art Nouveau movement viewed from the perspective of art dealer and collector Siegfried Bing. The name of his Paris gallery, L'Art Nouveau, was adopted to describe the late nineteenth-century art movement, otherwise known as Jugendstil. 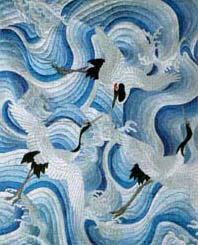 From 26 November 2004 to 27 February 2005 the Van Gogh Museum will present a major exhibition on the emergence of the French Art Nouveau movement viewed from the perspective of art dealer and collector Siegfried Bing (1838-1905). The name of his Paris gallery, L'Art Nouveau, was adopted to describe the late nineteenth-century art movement, otherwise known as Jugendstil.

L'Art Nouveau: The Bing empire tells the story of Art Nouveau based around Bing's gallery. More than 400 objects and works of art that passed through Bing's shop will be presented, some in period rooms: glassware from Tiffany, paintings and sculptures by artists such as Toulouse-Lautrec, Rodin, Claudel and Vuillard, and furniture, ceramics and jewellery by Van de Velde, Colonna, De Feure and Gaillard. It is the first exhibition of this magnitude to focus on the origins of the French Art Nouveau.

Bing started as a collector of Chinese and Japanese art. He played a key role as a promoter of Asian art, which was to have an enormous influence on many nineteenth-century artists, including Vincent van Gogh. In fact it was from Bing that Van Gogh bought the many Japanese prints he owned. The presentation reveals how significant the influence of Japanese art was on the development of Art Nouveau, featuring beautiful examples of kimonos, fans and masks as well as ceramics and prints.

One of the highlights of the show is a reconstruction of the Art Nouveau pavilion Bing presented at the Paris World Exposition of 1900. In an attempt to create a Gesamtkunstwerk Bing brought together three promising although relatively unknown designers: Georges de Feure, Edward Colonna and EugÃ¨ne Gaillard. Striking examples of their remarkably elegant designs are presented in the Van Gogh Museum in period rooms. Screens, sofas, showcases and a complete bedroom interior, together with porcelain, glass and textile provide an authentic idea of what the pavilion must have looked like.

With his progressive notion of making decorative furniture in a recognisably French style, Bing managed to bridge the gap between the ostensibly elitist visual arts and the somewhat denigrated decorative arts, thereby enabling ordinary people to have beautiful, aesthetic furniture in their homes. When he died, in 1905, his company, which had set the benchmark for design in the twentieth century, came to an abrupt halt.

L'Art Nouveau: The Bing empire is organised in collaboration with the MusÃ©e des Arts dÃ©coratifs in Paris. The show is compiled by Prof. Gabriel P. Weisberg (University of Minnesota, Minneapolis), an expert on Art Nouveau and European art at the end of the nineteenth century, Edwin Becker of the Van Gogh Museum and Evelyne PossÃ©mÃ© of the MusÃ©e des Arts dÃ©coratifs. The exhibition can be seen in the Museum Villa Stuck in Munich from 17 March to 31 July 2005, in the Caixa Forum in Barcelona from 6 September 2005 to 29 January 2006 and in Paris from March to July 2006.

Van Gogh buys at Bing's
Vincent van Gogh developed a fascination for Japanese prints while in Paris (1886-88) and bought hundreds of woodcuts from art dealer Siegfried Bing. A selection from Vincent and his brother Theo's collection of around 500 prints, now in the collection of the Van Gogh Museum, is presented in the print room of the exhibition wing parallel to the major Bing exhibition. The presentation also includes works by Van Gogh that were influenced by Japanese examples.

Symposium
The Van Gogh Museum in collaboration with the Dutch Postgraduate School for Art History will host an international symposium on Art Nouveau from 13 January to 14 January 2005. Specialists from around the world will survey specific artists and themes having a clear relation to the Bing enterprise. All inquiries regarding the symposium should be addressed to D'Arts bv: +31 (0)20 624 33 33, or e-mail to: info@bureau-darts.nl.

Documentary
AVRO is media partner for this exhibition and will be broadcasting a documentary on Siegfried Bing. It has been produced by IdÃ©ale Audience (France) as a co-production involving a number of television companies including France 5, SVT, YLE Teema, TV3 and RaiSat. The documentary will be on show during the exhibition in the auditorium of the museum.

Between Art & Kitsch
On Friday night, 10 December 2004, between 18.30 and 21.30 experts Klaas Akkerman and Frans Leidelmeijer will examine and assess Art Nouveau jewellery and objects brought by visitors.