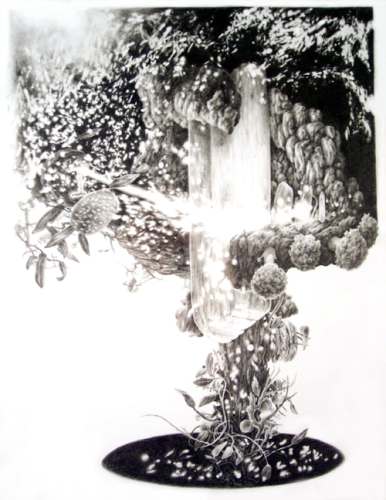 Jack the Pelican is pleased to present â€œThe Hedonistic Imperative,â€ guest-curated by Graham Guerra. The show is a tribute to David Pearceâ€™s 1996 online manifesto of the same name, which targets the elimination of suffering in all sentient beings through genetic engineering, nanotechnology and neuroscience. â€œThe worldâ€™s last unpleasant experience,â€ he writes, â€œwill be a precisely dateable event.â€

â€œTechno-feel-goodness in futureworld is anodyne delicious,â€ says curator Guerra, a recent Yale MFA who soloâ€™d at Jack the Pelican last Spring, â€œThe clumsy boy style of last yearâ€™s fashion in painting is soft comfort food. I'm into something less regressive, more positive.â€ The 12 artists in this exhibition wield technologies new and old, and often in combination, with virtuoso pharmacological precision to imagine the idyllic silicon-enhanced future of our technicolor â€œsuper wellâ€ descendants.

It is a paradise. Paul Jacobsen casts a glint of sunlight in the starring role of Gone to Croatan, his painting of a buxom maiden sprawled in the lush valley of futureworld. Kim Keever, in 2 photos, summons from the depths of a one-hundred-gallon tank the high baroque drama of yo-Western landscapes. Suzanne Walters paints deer-like figurines frolicking in a hazy polychrome bliss. Robert Yarber unveils an altogether new body of work of merry prancers sortie-ing through the muddy plain in celestial armillary bubbles.

The mutant body is pleased with itself. The gimp or headless satyrs and nymphs in James Adamsâ€™ paintings seem unaware they are anything other than perfectly made. Carl Dâ€™Aliva sculpts resin â€œCousin Itâ€ hair coats for his dog with a V8 engine for a head, his â€œmanolithâ€ and his monkey. Michael Rees rapid-prototypes headless arachnid-beasts from giant human fingers and legs. In his animations, he documents their first steps. Norm Paris overlays the anamorphic contours of specimen males Chris Dickerson, Boyer Coe and Arnold Schwarzenegger, in celebration of multi-dimensional man. And Jerry Kearns paints bodybuilder Jesus in a field of poppies.