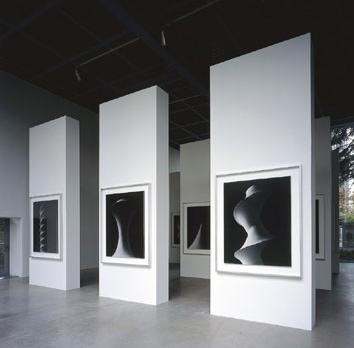 ''My new body of work, Conceptual Forms, consists of two parts, Mathematical Forms and Mechanical Forms. Mathematical Forms is subdivided into Surfaces and Curves.
Mathematical Forms are photographs of stereometric plaster models that were used to provide a visual understanding of complex trigonometric functions. They were made in Germany in the late 19th and early 20th century.
These machines and models were created without any artistic intention. This is what motivated me to produce this series of photographs and title them Conceptual Forms. Art is possible without artistic intention and can be better without it.'' Hiroshi Sugimoto

The Japanese photographer Hiroshi Sugimoto has chosen the Fondation Cartier pour l'art contemporain to present his latest series of works in an exhibition entitled Ã‰tant donnÃ©: Le Grand Verre. On view from November 13, 2004 to February 27, 2005, this exhibition includes a selection of 19 large format black and white images in an installation designed by the artist specifically for the spaces of the Fondation. The complete series of 44 photographs, organized into 3 groups Mathematical Forms: Surfaces, Mathematical Forms: Curves andMechanical Forms will be reproduced in the accompanying exhibition catalogue, realized in direct collaboration with the artist.
Hiroshi Sugimoto s special installation for the Fondation Cartier relates directly to the transparent glass architecture of the building of Jean Nouvel. By presenting his photographs in two separate sections, the Mathematical Forms: Surfaces and the Mechanical Forms, the artist has created a spatial reconstruction of Marcel Duchamp s most famous work, Le Grand Verre (The Large Glass). To realize these images, Sugimoto photographed a collection of 19th-century scientific objects at the Museum of the University of Tokyo. The Mathematical Forms: Surfaces are in fact a series of stereometric models in plaster that were used to provide students with a visual understanding of complex trigonometric functions. The Mechanical Forms represent a series of mechanical models that were used to demonstrate the basic movements of modern machinery.
Just as in Duchamp s Le Grand Verre, Sugimoto has used forms derived from science and engineering to represent the feminine and the masculine. The fluid curvilinear forms of the mathematical models and the rigid, crisply delineated forms of the mechanical models correspond respectively to the Bride and Bachelor sections of Duchamp s Le Grand Verre.
Approaching his subject with a precise sense of form and a clarity of focus, Sugimoto has transformed these scientific objects into strange and mysterious forms. By meticulously photographing each model from exactly the same point of view very close up in a 3/4 view from below Sugimoto has disturbed our notions of scale. While the original models are only 10 to 30 cm, their photographic versions appear monumental, the large format of the photographic prints (approx. 150x120cm) accentuating this impression. Sugimoto isolates the models from their surroundings, using sophisticated lighting to enhance certain forms while leaving others in the shadows. Posed and immobile, these silent figures emerge from the darkness in subtly modulated tonal graduations. The viewer is thus free to imagine the relationships they could have with other objects or forms, be they sculptural, anthropomorphic or architectural.
As the conceptual centerpiece of this exhibit, Hiroshi Sugimoto will present his photograph of a replica of Le Grand Verre that he discovered in the art museum of the University of Tokyo one of four existing replicas of the work in the world. Sugimoto s negative and contact print his replica of the replica will be presented sandwiched between two pieces of thick glass. Conceived in itself as a replica of Le Grand Verre, the spatial arrangement of Sugimoto s exhibition reproduces the famous work yet a third time, suggesting a photographic mise en abyme a replica of a replica of a replica.
Ã‰tant donnÃ©: Le Grand Verre is an exhibition that explores the interconnected relationships of photography, science, and the history of art, bringing into play many layers of meaning and multiple frames of reference. With this exhibition Sugimoto pays homage to Marcel Duchamp an artist who continuously inquired as to what role art could have in the age of mechanical reproduction. Perhaps one possibility is that art, like photography, can depict invisible worlds, not just visible ones and can thus engage the imagination and the intellect, not just the eyes.

Born in Tokyo in 1948, Sugimoto left his native Japan in 1970 to study art in Los Angeles at a time when Minimalism and Conceptualism were the predominant movements in the art world. These movements helped to define his unique approach to photography characterized by its rigorous sense of seriality, its probing analysis of empirical reality, and its pretensions toward the metaphysical. Hiroshi Sugimoto develops his works in series; a carefully considered concept serves as the point of departure for the creation of a body of work devoted to a specific theme. Five important photographic series have dominated the artist s career thus far: Dioramas and Wax Museums (1976 ), Theaters (1978 ), Seascapes (1980 ), Sanjusangedo, Hall of Thirty-Three Bays (1995 ) and Architecture (1997 ).

The series of works presented in this exhibition could not have been realized without the knowledge support and guidance of The University Museum, University of Tokyo.