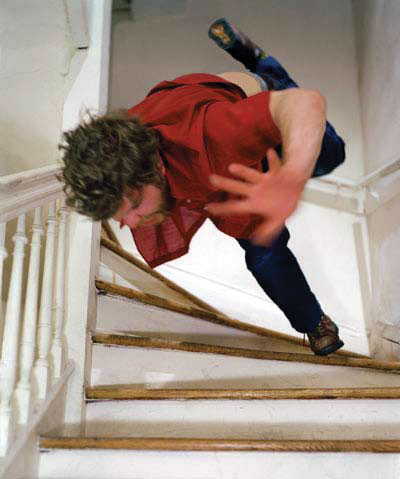 â€œUnspeakableâ€, the new exhibition designed by JÃ©rÃ´me Jacobs, focuses, as its name indicates, on what is unspoken, with works that invite the viewer to project his or her own interpretation.
What is Rainer Ganahl doing, one hand on the handlebars of his bike and the other one holding a camera, as he rides against the traffic in the streets of Damascus? What strange stories is Jimi Dams telling us in his drawings, and Teun Hocks and Jurgen Klauke in their photographic productions? Dieter Appeltâ€™s aim is to exorcise the dangerous nature of life: â€œThe image of destruction which he depicts is set against that of the methodical, structured and carefully thought-out construction of his imagesâ€ (Anne-Sophie Boivin). In a more comical way, Kerry Skarbakka also questions the fragility of existence, as he stages spectacular falls. More humour with PÃ©pÃ© Smit, who provides a portrait of herself as a Smurfette abandoned in the waves of the English Channel. Moreover, she shows a model surrounded by sweet little rabbits for the purposes of the shot. Alex McQuilkin, whose taste for provocation is familiar to us (one of her works was seized two years ago in Belgium during a group exhibition), presents a filmed confrontation between two self-portraits, two teenagers whose gestures leave the viewer considerable room for interpretation... Matt Marello goes further, superimposing his face on those of the protagonists in extracts from films, ensuring a series of crazy confrontations. The tragi-comic scenes of CÃ©dric Tanguy, Ina Senftleben and Adam Baer share a Baroque aesthetic that is far removed from the verism of Elinor Carucci, whose images are like pages from a private diary, and from the poetic realism of Joy Episalla, Diana Blok and Elisabeth Young. The portraits by John Lucas (American supporters of a football team) are also realist, however there is nothing poetic about them ... Paintings by Ronald Ophuis, videos by Ryan Mc Namara, Skip Arnold and Sophie Whetnall complete this eclectic group which is, however, coherent in its intention. Spread throughout the gallery like court jesters, Mitsy Groenendijkâ€™s little monkeys urge us to reflect on the meaning to be given to all of this ...
Pierre-Yves Desaive

Image: a work by Kerry Skarbakka