Culture of Mixing and Politics of Representation. The exhibition thematize the spectrum of artistic production in 'New Europe' following the end of the East-West confrontation. A central line of questioning inquires how a new culture of mixing, liberated identities, and options for action might arise. 10 artists and projects and initiatives from the European area. Curators: Marius Babias and Dan Perjovschi 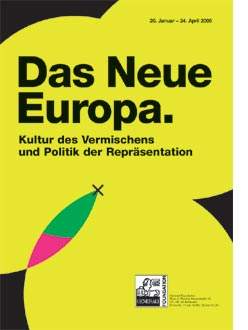 The New Europe. Culture of Mixing and Politics of Representation

In their exhibition created for the Generali Foundation, the two guest curators, Marius Babias and Dan Perjovschi, thematize the spectrum of artistic production in "New Europe" following the end of the East-West confrontation. Focus is on artistic positions that produce new connections between a culturally defined Europe and the underlying idea of political uniformity. A central line of questioning inquires how, in light of Europe's future self-definitions, a new "culture of mixing", liberated identities, and options for action might arise.

The artistic works represented in the exhibition deal with the following aspects of "New Europe": consquences of the Yugoslavian wars from the perspective of the female subject (Jasmila Zbanic); art activism as an integral component of democracy and civil society (Silke Wagner); surveillance of public space and competition between Europe and the U.S. in the field of military technology (Renaud Auguste-Dormeuil); the artist's changing role under post-communist conditions (Dan Perjovschi); art as a recording media for knowledge, experience, and memory in a transforming European landscape (Lia Perjovschi); Europe's sealing off in a supposed world without borders (Hito Steyerl); activation of public space as a prerequisite for political participation in decision-making processes (Natascha Sadr Haghighian); intensification of phenomena of social community in a new type of trade (Oda Projesi); production of racism through language and media (Marlene Streeruwitz); and documentation of everyday life in different European and U.S.-American cities (John Miller). In addition to the artistic works, 15 projects and initiatives from throughout the entire European area will be introduced. The presentation display is available for visitors to use as a pool of materials and information. The documented projects and initiatives join with the artistic positions, emphasizing the claim of the exhibition; to give new impetus to the discussion of Europe.