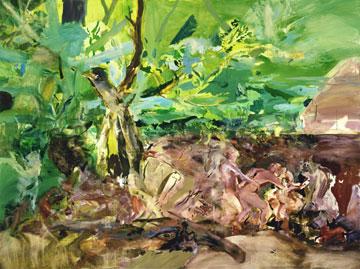 Gagosian Gallery is pleased to announce an exhibition of recent paintings by Cecily Brown.

The exploration of form and the tension between figuration and abstraction are central to Brown's work. The artist revisits old master imagery, as well as scenes lifted from popular culture in order to create her own vision where human form and brushwork amalgamate, transcending notions of classical genre and narrative. Subject matter is liberated from its original context and positioned within a new reality.

Cecily Brown's work has been the subject of numerous solo exhibitions and group shows. Personal exhibitions include those at the Hirshhorn Museum and Sculpture Garden, Washington, D.C., 2002, Museo d'Arte Contemporanea Roma, Rome, 2003, and the Museo Reina SofÃ­a, Madrid, 2004. She also participated in the 2004 Whitney Biennial. In June 2005 Cecily Brown's paintings will be the subject of a solo exhibition at Modern Art Oxford, England.

Gagosian Gallery is pleased to announce an exhibition featuring monumental works by David Smith and Alexander Calder. These masters of painted steel sculpture achieved international recognition in their lifetime for having created an idiomatic American vision to what had previously been thought of as the exclusive purview of European Modernism.

After pursuing abstraction and figuration throughout their careers, David Smith and Alexander Calder increased the scale of their works to a monumental level in the late 1950s. As they each explored this new scale, they continued to challenge the stress between positive and negative space. In "Mobile," 1963 Calder used heavy, industrial steel to create a delicate object that floats gracefully in space. In "Oval Node," 1963, and "Gondola II," 1964, Smith plays between the density of steel and the lyricism of abstraction. It is remarkable that two sculptors from the same generation, both working in painted steel, created such distinct works.

Although rarely exhibited together, it is noteworthy that in 1962, about the same time the works on view were created, Calder and Smith were included in the Spoleto Festival, The Festival of Two Worlds. In 1993, the Guggenheim Museum featured each artist, as well as Picasso, GonzÃ¡lez and Giacometti in the landmark exhibition Picasso and the Age of Iron.

A major retrospective of David Smith's work, organized by the Solomon R. Guggenheim Museum, New York, will open in January of 2006. This exhibition will travel to the Centre Georges Pompidou, Paris and the Tate Modern, London.