Europaisches Zentrum fur Futuristische Kunst. Developing a complex multimedia work since the late 70s, the artist carries the spectator away in an abundance of images, words and alienating sound, connecting subject matters from the most different realms. Every exhibition functions as a 'surviving mechanism' introducing new works or recontextualizing older pieces. 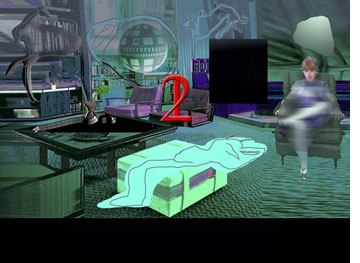 The Kunsthalle Bern is delighted to announce the first solo-exhibition in Switzerland of Belgian artist Anne-Mie van Kerckhoven (Antwerp, B, 1951).

Developing a complex multimedia work since the late 70s, Anne-Mie van Kerckhoven carries the spectator away in an abundance of images, words and alienating sound, connecting subject matters from the most different realms. Every exhibition functions as a 'surviving mechanism' introducing new works or recontextualizing older pieces. The logic is that of expansion rather than limitation. Hence 'multiplicity' is a quality; as a field of interpretations intended to compensate the entropic drift of meaning. The way Anne-Mie van Kerckhoven 'installs' some of her works in a flexible structure is an answer to her obsession for systems in which invisible forms of self-organisation are at work, such as the human brain, a computer virus, a living organism, an ant colony or an internet database.

The exhibition at the Kunsthalle Bern will assemble a variety of works, including drawings, light boxes and a series of Headnurse installations consisting of a wooden supporting structure onto which at least three perforated metal sheets are fixed. On these sheets the artist places images and computer prints with a magnetic coating on the back. Anne-Mie van Kerckhoven will install two specially commissioned works for the Kunsthalle: The Populace (2005), an installation in the entrance hall with stills from a recent animation movie, reflects on the way fungi grow and Against Meaning (2005), a slide show with 'sleaze' imagery in black and white will be installed in the stairs.

This show will also include two of Anne-Mie van Kerckhoven's major recent works: Deeper (2004), a circling filmic projection that follows the movements of a dancer, acquires a heightened poignancy considering the 'Totentanz' tradition in Bern; and Rorty, The HeadRoom (2004), an ambitious installation creating and organising an image in several layers, projected by two interlinked data-projectors in a half-darkened room. The spectator walks through a network of sensors and activates particular hyperlinks: animations, texts, and a variety of 'philosophical' rooms inhabited by several people/friends who play the part of philosophers. The complexity of the installation grows with every new encounter with a spectator who inspires the response, logic and interactivity of the HeadRoom; in this way the installation imitates the neurological structure of the brain.

Anne-Mie van Kerckhoven is fascinated by the radical combination of man and technology in an increased intensity. Her work reflects our desire to find the veiled meaning behind the newly-formed virtual archetypes. At the same time it incorporates the fear aroused by the question of whether man can cope with the transition in which machines are used to generate a new chance for modernism. Anne-Mie van Kerckhoven professes futurism out of necessity, realising that we have changed our surroundings so drastically that we are now changing ourselves in order to be able to exist in this new environment.