Part II, the second installment of the gallery's final exhibition at its location. This show marks an end to the gallery's five-year run in the Meat Market and announces the opening of the new space on the occasion of the gallery's ten year anniversary. Works by Nathan Carter, Jason Dodge, Trisha Donnelly, Pamela Fraser, Anna Gaskell, Liam Gillick, Carsten Holler, Jonathan Monk, Simon Starling, Johannes Wohnseifer 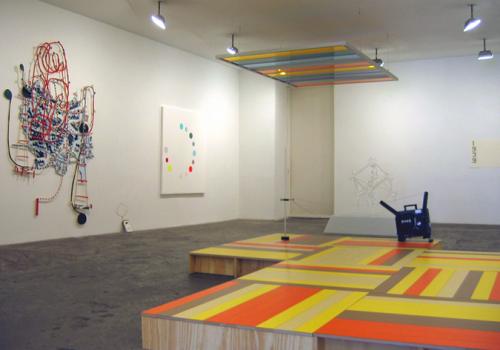 Goodbye 14th Street is a group exhibition that features artworks from a selection of the gallery's represented artists. This show is a culmination of the various aesthetic principles, ideas, and ideologies which have inspired many of the exhibitions shown throughout the gallery's tenure on 14th Street.

The exhibition will include: a wall-based relief sculpture by Nathan Carter; an installation of twinned mirror-image portable radios by Jason Dodge; a pencil on paper drawing entitled, '1939' by Trisha Donnelly; a new painting by Pamela Fraser entitled "Explanation of the foregoing Phenomena;" an installation of 9 ink on paper drawings entitled, 'The Bell Rock' by Anna Gaskell; an idea/proposal for a wooden bar floor installed along with an aluminum and colored Plexiglas hanging ceiling platform by Liam Gillick; a reevaluation in the form of a glass model of the Atomium monument originally built in 1958 for the Universal Exhibition in Brussels by Carsten HÃ¶ller; a 16mm film entitled 'From A to B and back again' by Jonathan Monk featuring two jigsaw puzzles with images of a circle and a square that slowly trade places; a photograph picturing the bicycle used in the artist's recent Tabernas Desert run by Simon Starling; and a painting inspired by a sketch of the Cologne airport designed by Paul Schneider-Esleben will be presented by Johannes Wohnseifer.