The show is comprised of approximately 120 paintings, sculptures and works on paper and examines the history of Surrealism in the U.S. between 1930 and 1950. Included are key figures of the European movement such as Max Ernst, Salvador Dali', and Yves Tanguy, who are represented in the exhibition with works they made while in exile in the United States. Also included are their stateside counterparts David Smith, Kay Sage, Dorothea Tanning, Alexander Calder, Joseph Cornell and others 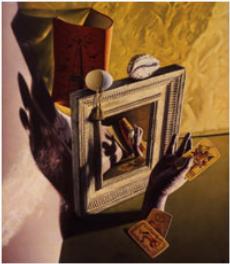 Surrealism USA is comprised of approximately 120 paintings, sculptures and works on paper and examines the history of Surrealism in the United States between 1930 and 1950. Included are key figures of the European movement such as Max Ernst, Salvador Dali, and Yves Tanguy, who are represented in the exhibition with works they made while in exile in the United States. Also included are their stateside counterparts David Smith, Kay Sage, Dorothea Tanning, Alexander Calder, Joseph Cornell and others. This is the first exhibition since 1977 specifically devoted to Surrealism in America.

One of the most revolutionary artistic and intellectual movements of the twentieth century, Surrealism still exerts a strong appeal today, more than fifty years after its heyday. The profound influence that this world of fantasy and dream had on art and culture continues through today, particularly its exploration of the irrational as a creative source.

Vast information is available on European Surrealism, but during the past two decades much research has been done on American Surrealism as well, and many unknown works have surfaced, bearing witness to the importance of the movement in this country. This exhibition, organized by the National Academy Museum, proposes to examine the manifestations of Surrealism in the United States from about 1930 to 1950, in New York as well as other cities such as Dallas, Los Angeles, San Francisco, and Chicago.

Launched in France in the 1920s, Surrealism gained wide popularity in the U.S. in the following decade. Several galleries â€“ notably Pierre Matisse and Julien Levy â€“ began showing the work of European Surrealists on a regular basis, while major group exhibitions such as the Museum of Modern Artâ€™s Fantastic Art, Dada, Surrealism of 1936 brought it to the attention of a larger public. As a result, dream imagery and a dose of the irrational began invading American art, infiltrating even such traditional movements as American scene painting and social realism. In the 1940s, the presence in New York of European Surrealists in exile, including the groupâ€™s leader, AndrÃ© Breton, gave the movement a new vitality. Even though American artists avoided the rigid group organization that characterized the movement in Paris (Peter Blume politely turned down Bretonâ€™s offer to become a member of the group), they experimented with new themes and techniques promoted by the Surrealists, which, in turn, led to original developments, such as Abstract Expressionism.

The works in the exhibition are borrowed from public and private collections in the United States and abroad, and all aspects of the Surrealist movement in America will be represented: The figurative depictions of a fantasy world by Peter Blume, Dorothea Tanning, and Helen Lundeberg; the so-called social surrealism of O. Louis Guglielmi, James Guy, and Walter Quirt; the imaginary landscapes of Kay Sage and Yves Tanguy; Joseph Cornellâ€™s poetic and enigmatic constructions; the lyrical abstractions of Arshile Gorky and William Baziotes; the automatic experiments of Gerome Kamrowski, Jackson Pollock, and Knud Merrild. Sculpture will be represented by Alexander Calder, Isamu Noguchi, and David Smith among others. Works by non-American artists who worked in the U.S. at the time, such as Roberto Matta Echaurren, Salvador DalÃ­, Max Ernst, and AndrÃ© Masson will also be featured.

A fully illustrated catalogue edited by Isabelle Dervaux, Curator of modern and contemporary art at the National Academy, and curator of the exhibition, will accompany the exhibition, with essays exploring the specificity of American Surrealism from various perspectives. Other contributors include Gerrit Lansing, Michael Duncan, Robert Lubar, Robert Hobbs, and Scott Rothkopf.

Surrealism U.S.A. will travel to the Phoenix Art Museum, Arizona, where it will be shown from June 5 to September 25, 2005.