Minipaintings. The artist has been producing Minipaintings since the 70's and a selection from 1990-2004 are on show here. They are small objects the size of a hand. Oil paint is applied in thick layers, mainly with a palette knife, on fine tinted linen canvas. The front surface is scratched to reveal underlying colours which are then responded to by added brushstrokes. 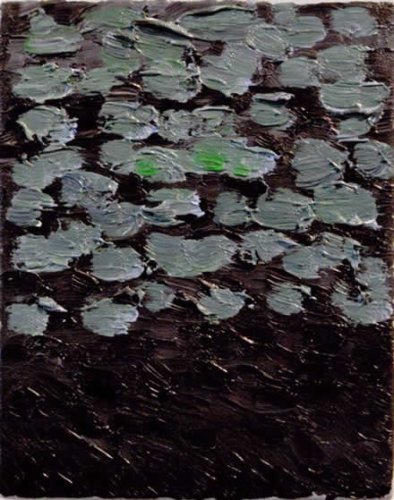 The artist has been producing Minipaintings since the 70's and a selection from 1990-2004 are on show here. The Minipaintings are small objects the size of a hand. Oil paint is applied in thick layers, mainly with a palette knife, on fine tinted linen canvas which has been fastidiously stretched over heavy plywood so that no folds are seen. The front surface is scratched to reveal underlying colours which are then responded to by added brushstrokes. The result is a bustle of thoughtful but apparently casual calligraphies recalling one another in a counterpoint that stems from the juggling of sheer sensibility.

These small paintings can command the space of a large wall and visually stretch beyond it, occupying with their presence the whole surrounding area. Pozzi once remarked that his is "never only a picture hanging on a wall but also a wall activated by a painting". His attitude reflects his having been one of the pioneers of the thinking that incorporates in the making of every art piece an acknowledgement of its environment.

Lucio Pozzi's venture is characterized by his relentless emphasis on painting as a matrix that extends beyond its boundaries in several directions and techniques. He operates on many cross-referenced levels among which the application of paint by hand holds the prominent position, but he is wary of the pitfalls of specialization. His is a process of changing strategies and at the same time a strategy of change.

To accompany this exhibition, the artist has made several watercolours and a site-specific installation in the gallery's crypt. The installation is entitled 'From Lucio to Lucio' in homage to Lucio Fontana.

Lucio Pozzi was born in 1935 in Milan, Italy. He shares his time between his studios in New York City and Bardolino near Lake Garda. He is a legendary teacher at the School of Visual Arts in New York. 2005 marks the continuation of a second series of museum exhibitions started in 2001, in which many facets of his practice were shown. The first series of such comprehensive surveys took place in the eighties in Kunsthalle Bielefeld, Badischer Kunstverein, MusÃ©e de la Bouwerie, LiÃ¨ge and other locations.

Pozzi was honored with a National Endowment for the Arts Fellowship in 1983. His work has been presented at Documenta 6 (1977) and at the Venice Biennale (American Pavilion) in 1980. On August 20, 2005, the whole Contemporary Art Centre of Vilnius, Lithuania will be emptied to accommodate the premiÃ¨re of MACHUNAS, a Performance Oratorio by him and composer Frank J. Oteri. 'Paper Trail', a retrospective of 150 of his works on paper, will open in September at Museo Villa Croce, the museum of contemporary art in Genoa, Italy. The show will travel to other institutions at later dates.