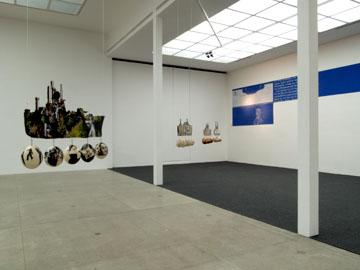 The theme of this exhibition is not very original. As early as in the fourteenth century, art was portraying the effects of government - on people, animals, landscapes and economies (Ambrogio Lorenzetti, Allegory of Good and Bad Government, Siena Town Hall). In a similar vein, but a few centuries later, the French philosopher Michel Foucault proposed an interpretation of government as an action that acts upon other actions (the actions of others).

Such a focus on the spheres of action has advantages, especially if it helps to avoid the tired oppositions of individual and state power, of local and global conditions and thus allows new and different perspectives on power relations. (Certain things, however, such as torture or deportation, must remain to be named again and again for what they are).

"Actions that act upon other actions (the actions of others)" - how does this relate to art? - In a mediated way: Since it is the medium of exhibition, that allows art to become visible, the actual space of the exhibition can itself be seen as a sphere of action, regulated by interventions. In the series of shows to date (Luneburg, Barcelona, Miami), Die Regierung (The Government) has covered various interventions ranging from the dissipation of Europe's education system to the anhiliation of collective memory. At Secession, we focus on an aspect that is intrinsic to art: artworks themselves are condensed actions.

To conceive of art as an action does not necessarily imply that art must somehow or other be seen as an intervention in reality. Instead, art's capacity to act is realized only in the process of aesthetic experience. Thus, action can also be seen perceived in the interaction between artworks and their audience, which in turn is conceived only in the act of reception itself.

Paradiesische Handlungsraume, then, is an attempt to take up the condensed actions of specific artworks in the form of the exhibition itself, even to fuse them in what might be seen as a three-dimensional film. And it seeks to involve the viewers in its compositional endeavor: every Tuesday, the "film" changes its mise-en-scene, with the individual "takes" commenting on, revising and overlapping each other, contextualizing works differently, or setting them free of all relations. Thus, we hope to achieve a dynamic picture of our world, a picture in which, moreover, we ourselves play a part.

The claim that an audience itself is the product of a process of reception is meant quite seriously. How then does the exhibition's experimental sphere of action effect those who visit the show? In order to play back these effects into the experience of the exhibition itself, we are working with high school students, who will be responsible for a part of the Secession's educational program during the show: Twice weekly, a group of students will act as guides through the exhibition, initiating anyone who wishes to be enlightened.

TALK, March 10, 2005, 6.30 p.m.
The curators Ruth Noack and Roger M. Buergel with Alice Creischer and Andreas Siekmann, artists of the exhibition.
Organised by Friends of the Secession.