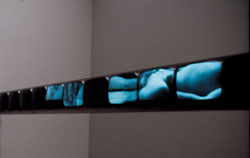 The San Francisco Museum of Modern Art (SFMOMA) will present Image, Body, Text: Selected Works by Gary Hill March 24 through May 30, 2005. The exhibition includes seven installations dating from 1991 to 2000 in which acclaimed media artist Hill explores video in both its sculptural and projected forms. Suspension of Disbelief (for Marine), 1991â€“92â€”an early example of Hillâ€™s sculptural video work and a recent joint acquisition of SFMOMA and the Hirshhorn Museum and Sculpture Gardenâ€”features thirty rasters (monitors stripped of their casings) set side by side in an I-beam, a spatial representation of the thirty frames in one second of video. Two naked bodies stretch across the screens and flicker like a musical composition. The pieceâ€™s title references Hill preoccupation with illusion as an inherent quality of the mediated world, evidenced here in the unnatural movements and dimensions of the projected bodies.

â€œGary Hill is undoubtedly one of the most talented artists of his generation. His contribution to the field of media arts is truly remarkable. It is an honor to present this selection of his works at SFMOMA,â€ says Benjamin Weil, exhibition curator.

Born in 1951 in Santa Monica, California, Hill, an autodidact, spent much of his childhood skateboarding and surfing. At 15 he began making sculptures of welded metal and spent a summer at the Woodstock Art Studentâ€™s league, and in 1973 he was introduced to video at the Woodstock Community Video Center. Starting with his earliest video experimentation, Hillâ€™s work has dealt frequently with mapping and exposing the body and exploring ideas of illusion. His dynamic output over the last 25 years reveals influences of both classical art and mass media, incorporating such varied elements as performance and sculpture, as well as video.

Hill is considered one of the most talented artists currently working in the field of media art. He has exhibited extensively at museums across the world, including the Stedelijk Museum in Amsterdam, the Centre Pompidou in Paris, the Museum of Modern Art in Oxford, the Moderna Museet in Stockholm, as well as the Museum of Modern Art and the Whitney Museum of American Art in New York. A comprehensive retrospective of his work was organized in 2002 at the Kunstmuseum Wolfsburg in Germany. He has lived for many years in Seattle, where he founded and still runs the video department at the Cornish University.

$12 general; $8 SFMOMA members, students, and seniors. Tickets are available at the Museum (no surcharge) or online.