The Art of Aggression: Iraqi Stories and Other Tales. An exhibition that focuses on political and corporate aggression with work by nine international artists. The work is political without being partisan, emphasizing the very human face of hostilities. Sketches From the Front. Drawing from Life: Steve Mumford in Iraq, 2003-2004. Inspired by Winslow Homer's Civil War paintings, the artist made four trips to Iraq to chronicle military and civilian life in the U.S.- occupied country. Plus e-flux video rental 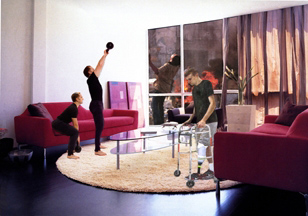 The Art of Aggression: Iraqi Stories and Other Tales

MIAMI â€“ The Art of Aggression, an exhibition that focuses on political and corporate aggression with work by nine internationally known artists including: Wayne Gonzales, Emily Jacir, Mark Lombardi, An-My LÃª, Dominic McGill, Mary Ellen Mark, Steve Mumford, Josh On & Futurefarmers, Martha Rosler, and Moises Saman will open at The Moore Space on Thursday, April 14 from 7-10pm (through July 1, 2005). Curated by Jean Crutchfield and Robert Hobbs, the exhibition is on view at the Reynolds Gallery in Richmond, Virginia until March 12, 2005.

Even though aggression has become a major characteristic of recent preemptive corporate, terrorist, and national conflicts, its assumptions and effectiveness are being hotly debated in red and blue states as well as across the globe where winning the peace by waging war is viewed as a rallying cry and a contested issue. Weighing in on this topic, the work in this exhibition is political without being partisan, emphasizing the very human face of these hostilities. At the same time that the artists in this exhibition examine pertinent aspects of the United Statesâ€™ recent participation in two Iraqi wars, they also question the role their work can play in supporting or undermining any aggressive offensive. Underlying its creativity is the ongoing question: is the work of art motivated by facts or fables, the truth or a postmodern staging of it according to the prevailing codes of understanding. The word â€œartâ€™ in the exhibitionâ€™s title refers to (1) the skill employed in administering a specific technique, including the waging of political and military attacks and (2) the aesthetics involved in qualitatively representing aspects the human condition. This exhibition intends to convey the range of work now being made as a reaction to the U.S.â€™s participation in two Iraq wars.

During his ten-and-a-half month stay in Iraq, Steve Mumford created on-the-spot illustrations of actual events that he witnessed.

Mark Lombardiâ€™s constellations of political, military and business interests that document the flow of moneys in the international arena in general and in particular money laundering and covert action in the Golden Triangle.

New Zealand-born Josh On & Futurefarmersâ€™ anti-war video game against terrorism and website entitled They Rule that presents overlapping affiliations of the board members of major corporations.

Vietnamese-born An-My LÃªâ€™s chronicles of war in the form of elaborate rehearsals for battle undertaken by U.S. Marines in Californiaâ€™s Mojave Desert in anticipation of fighting in Iraq and â€œliving historyâ€ performances, which were cast, directed, and then played by Vietnam war re-enactors in Virginiaâ€™s and North Carolinaâ€™s pine forests.

Viewing aggression as a mixture of fact and fiction in his drawing of the Bay of Pigs fiasco, Dominic McGill takes a wide-angled look at some conspiracy theories that have arisen over JFKâ€™s assassination.

Wayne Gonzales solemnizes the current American war effort as an enigmatic icon in his haunting painting, which was conceived in terms of pixels and rasters. It depicts an aerial view of the U.S. Pentagon that leaves viewers wondering if it is intended as a trademark of an aggressive era or a terrorist target.

Tracing the human wreckage of aggressive assaults in the Middle East, documentary photographer Moises Saman confounds viewers with the appalling beauties of widespread devastation and suffering.

Martha Rosler straddles the disconnect between the comforts of home and the horrors of war in her photomontages of mass-media imagery, while photographer Mary Ellen Mark chronicles warâ€™s enduring scars in an intimate portrait of an Iraqi war veteran.

Robert Hobbs
Hobbs interest in the Middle East stems from his appointment as Chief Curator of the Tehran Museum of Contemporary art in Iran, 1978. Hobbs has served as the U.S. Commissioner and curator for the 1982 Venice Biennale His retrospective Robert Smithson: Sculpture at the Whitney Museum of American Art was the first on this artist as was the Mark Lombardi exhibition, which has just closed at the Art Gallery of Ontario, Toronto and will soon open at the Milwaukee Museum of Art.

Sketches From the Front
Drawing from Life: Steve Mumford in Iraq, 2003-2004

Miami, FLâ€”Drawing from Life: Steve Mumford in Iraq, 2003-2004, opens at The Moore Space on Thursday, April 14, and runs through July 1, 2005. The exhibition was curated collaboratively by Matthew Kolodziej, Assistant Professor of Art at the Myers School of Art, University of Akron, Ohio, and Gregory Wittkopp, Director of Cranbrook Art Museum, Bloomfield Hills, Michigan, with the assistance of Magdalena Sawon, Postmasters Gallery, New York City. Before opening at The Moore Space, the exhibition was presented at the University Art Galleries, Myers School of Art, University of Akron, November 1 through December 3, 2004, and Cranbrook Art Museum at Cranbrook Academy of Art, January 29 through April 3, 2005.

Inspired by Winslow Homerâ€™s Civil War paintings, New York-based artist Steve Mumford made four trips to Iraq in 2003 and 2004 to chronicle military and civilian life in the U.S.-occupied country. Traveling between Basra, Baghdad, Tikrit, Samarra, Karbala, Kirkuk, Dohuk and Hilla as an embedded journalist with the US military units, Mumford produced hundreds of drawings and paintings that capture the day-to-day existence of soldiers and Iraqis in a war-torn country. As an artist, Mumford secured his US Military press credentials through the online magazine, Artnet.com. He posted sixteen dispatches to the site over a two-year period including a chronicle of the attempts by the Third Brigade of the First Cavalry Division to quell insurgents in Baghdad in late October of 2004. Mumfordâ€™s â€œBaghdad Journalâ€ was first posted in August of 2003 via a laptop and a satellite phone. The series represents his written account of the war in Iraq, the margins of which were illustrated with thumbnails of the drawings and photographs he took of his experiences with the people and places he observed.

As he traveled for a total of 10 months in Iraq, Mumford made ink drawings and watercolors in a sketchbook --many of them on the spot -- recording daily street life, military actions, private headquarters of the U.S. soldiers, check points, encounters with Iraqi artists and museums, oil fields, mass graves, market days, and the surrounding countryside.

â€œThe complex and highly charged entanglement of art and life in a worn-torn environment makes Steve Mumfordâ€™s project in Iraq unique,â€ says Gregory Wittkopp, Director, Cranbrook Art Museum. â€œThe drawings, accomplished and expressive, are often moving and beautiful; not a simple task given that many are made in stressful circumstances.â€

Before beginning on this project, Mumford, age 44, was well known in the London and New York gallery worlds for his paintings of the American landscape with a contemporary twist. He was beginning work on a Vietnam series when the invasion of Iraq began. By that time the subject of war had become an â€œall-consuming interest,â€ says Mumford. After securing a press pass from Artnet, he bought himself his first plane ticket to Kuwait in April 2003 (he financed the project with sales of his own work and with a little help from his wife, the painter Inka Essenhigh). After this visit he returned to the region three times and his position on the war changed over the course of his travels. â€œInitially I went to Iraq convinced that the war was a big blunder,â€ says Mumford. â€œBut I began to understand the invasion differently after spending time with Iraqis and hearing firsthand about life under Saddem Hussein.â€

The Iraq project has brought Mumford much media attention including: ABC News Person of the Week, December 17, 2004; and a feature story in the December 13, 2004 edition of the New York Times.

There is a long tradition of artists documenting war including: Otto Dix, KÃ¤the Kollwitz, and Goya to name but a few. American artist Winslow Homer, who inspired Mumford, also served in the role of reporter documenting the events of the Civil War for the magazine, Harperâ€™s Bazaar.

The Moore Space is a non-profit arts organization dedicated to multi-disciplinary contemporary art practices. It offers a year-round program including exhibitions, educational programs, internships, artist residencies, lectures, and performances. Since its founding in 2001 by collector Rosa de la Cruz together with Craig Robins, an integral part of its exhibition program has been to invite guest curators to contribute new ideas and new thought to the organization and the Miami arts community at large. The sponsors of the exhibition include: Rosa and Carlos de la Cruz, Craig Robins and Miami-Dade County Department of Cultural Affairs, Cultural Affairs Council and The Mayor and the Miami-Dade Board of County Commissioners.

The Moore Space is pleased to announce the opening of e-flux video rental in Miami this Thursday, April 14, 2005, 7-10 pm.

A project by Anton Vidokle and Julieta Aranda, e-flux video rental (EVR) comprises a free video rental store, a public screening room, and an archive. Its collection, selected in collaboration with a large group of international curators, consists of nearly 500 art films and video works, and is available to the public for home viewing free of charge. Initially started at a storefront located in the Chinatown neighborhood of New York, EVR quickly became an international project, and now operates a branch at KW Institute of Contemporary Art, Berlin, and the International Manifesta Foundation, Amsterdam. For each of its new locations, EVR will expand its inventory to include new selections by local curators invited jointly with the hosting institutions. A program of talks and special screenings will continue at all the branches. EVR will operate in Miami through the end of August, 2005.

On May 12, 2005 Anton Vidokle and Julieta Aranda will screen a special program of EVR staff pick - a selection of their favorite works from the EVR inventory, starting at 7 pm., including:

The Moore Space
4040 NE 2ndAvenue, 2nd Floor
Miami
Exhibition hours are Wednesday-Saturday from 10 am to5pm, and by appointment