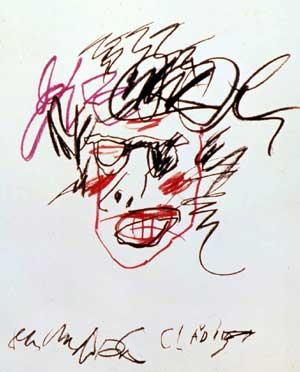 The Chelsea Art Museum showcases selected paintings and works on paper from the contemporary art collection of New York residents Jim Cottrell and Joe Lovett from April 22 through May 29, 2005. More than 40 works have been selected from Co-Conspirators: Artist and Collector, a traveling exhibition that originated at the Orlando Museum of Art in 2004. The works on view include paintings, drawings, watercolors and mixed-media works on canvas.

Cottrell and Lovett have been collecting art since 1976. Much of their collection began by building a personal relationship with an artist resulting in a long-term commitment to their work.

The aesthetic of the collection is overridingly in favor of painting â€“ usually abstractions with a built-up surface of paint. Some of the finer works in this category include paintings by Donald Baechler, Jean Michel Basquiat, Keith Haring, Deborah Kass, Jonathan Lasker, Suzanne McClelland, Malcolm Morley and Barton Benes. The collection offers an in-depth look at many of the artists, often through three or more examples of their work. The focus of the collection includes artists working in the United States, Spain and France. The international artists include Miguel BarcelÃ³, Roland Flexner, David Hockney and Edouard Prulhiere.

In reflecting on how the collection began, Joe Lovett notes, "Artworks I originally collected were given to me by friends. I never had a desire to own grand or expensive works. I am just as happy to see it in a museum as on my own walls. But one day, Jim said to me, â€˜If we donâ€™t support the work, how will the artist survive?â€™"

Co-Conspirators: Artist and Collector was coined by Orlando Museum of Art curator, Sue Scott, to propel whatâ€™s at the heart of this unique collection; itâ€™s longstanding dedication to building personal relationships with artists to achieve a deeper understanding of art. Jim and Joe continue to acquire works by many of the artists they came to know over the years, oddly in contrast to an emerging art buying trend recently reported on by Village Voice chief critic, Jerry Saltz who writes "Typically, collectors [have been] affluent and involved, if sometimes annoying about their obsessions. [Todayâ€™s] buyers are the opposite: They're affluent but detached and are almost always annoying. They tend to buy only in public, acquire impulsively, and usually buy only one work by an artist. They rarely cultivate relationships with dealers or artistsâ€¦"

For Jim Cottrell it was clear early on: "When we started collecting, I used to think it was the image that was important. But as time went on, it became more about the artistsâ€™ relationship to the world. Itâ€™s been an evolution in what and how I collect and most of that has to do with getting to know the artists."

Jim Cottrell is an internationally renowned academic anesthesiologist, researcher and author. His book Under the Mask: A Guide to Feeling Secure and Comfortable During Anesthesia and Surgery (Rutgers University Press) is his first book for the lay public. Joe Lovett is an award-winning documentary filmmaker specializing in public health and social issues. His latest film Gay Sex in the '70s will have its world premiere at the Tribeca Film Festival that coincides with the Chelsea Art Museum exhibition beginning April 21st. Jim Cottrell and Joe Lovett were listed among Art & Antiques Top 100 Collectors in 2001.