The first exhibition dedicated to the entire career of Hilla Rebay (1890â€“1967), one of the founders of the Museum in 1939, and its first curator and director. The exhibition explores the full range of her artistic production over six decades with 140 works, including her early non-objective watercolors; drawings; large-scale paintings and portraits; figurative and non-objective collages. Also on view will be several masterpieces by her colleagues and friends. 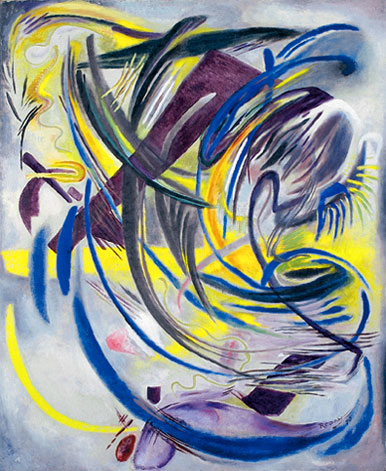 Art of Tomorrow: Hilla Rebay and Solomon R. Guggenheim, the first exhibition dedicated to the entire career of Hilla Rebay (1890â€“1967), one of the founders of the Guggenheim Museum in 1939, and its first curator and director, opens at the Guggenheim on May 20, 2005. Organized by the Solomon R. Guggenheim Museum in collaboration with Museum Villa Stuck, Munich, and Schlossmuseum Murnau, the exhibition explores the full range of her artistic production over six decades with 140 works, including her early non-objective watercolors; drawings; figurative and non-objective collages; large-scale non-objective paintings; and portraits, among them a formal portrait of Solomon R. Guggenheim (1861â€“1949). Also on view will be several masterpieces by her colleagues and friends, including Jean Arp, Rudolf Bauer, Vasily Kandinsky, Hans Richter, and Kurt Schwitters, as well as works by John Ferren, Fernand LÃ©ger, Juan Gris, Ben Nicholson, Pablo Picasso, Rolph Scarlett, Friedrich Vordemberge-Gildewart, Jean Xceron, and others. Photographs, sketchbooks, historic exhibition catalogues, and miscellaneous publications relating to Rebay's work and the exhibitions she organized will also be shown. The exhibition remains on view through August 10, 2005.

An accomplished artist who studied in Munich, Berlin, and Paris, Hilla Rebay embraced the idea of â€œnon-objectiveâ€ art as both an aesthetic style and a manifestation of spirituality. She began to exhibit at the age of 22 in Cologne, and was subsequently introduced to the avant-garde in Berlin, where she was drawn to the work of the modernists who exhibited at that city's Galerie Der Sturm, including Arp, Bauer, Kandinsky, Paul Klee, Richter, and Schwitters.

After Rebay moved to America in 1927, she was commissioned by Solomon R. Guggenheim to paint his portrait and began her mission to encourage him to collect the non-objective art she so fervently supported. Rebay introduced Guggenheim to Kandinsky, and with her encouragement he purchased more than 150 of the artist's works as well as paintings by other abstract and non-objective artists, including Bauer, Albert Gleizes, LÃ©ger, and LÃ¡szlÃ³ Moholy-Nagy.

In 1937 the Solomon R. Guggenheim Foundation was established, and Rebay and Guggenheim envisioned the construction of a museum to house his magnificent collection of modern art. In 1939 Guggenheim rented a building on East 54th Street in New York, which Rebay transformed into a temporary exhibition space, called the Museum of Non-Objective Painting; in 1947 it would move to a townhouse at 1071 Fifth Avenue. A fiercely independent woman of impressive energy, Rebay organized a series of traveling exhibitions devoted to the collection as well as exhibitions at the museum and continued to advise Guggenheim on the purchase of works. In 1943 Rebay contacted architect Frank Lloyd Wright, whom she perceived to be a kindred spirit, to design the museum of her dreams, â€œa temple to non-objectivity,â€ which would finally open in 1959. By that time, Wright and Guggenheim had already passed away and Rebay had retired from the museum.

The extraordinary collaboration between Hilla Rebay and Solomon R. Guggenheim resulted in one of the world's finest collections of early twentieth-century modernism. This accomplishment was expressed in particular through Art of Tomorrow, the opening exhibition at the Museum of Non-Objective Painting, which introduced key works from Guggenheim's collection to a New York audience in 1939. The present exhibition will showcase over 30 important works by the artists that Guggenheim first collected under Rebay's guidance, and which were included in the Art of Tomorrow catalogue published for the opening of the museum, thus attesting to the prescience of the institution's founders and the historical importance of the collection today. Some 40 photos, sketchbooks, historic exhibition catalogues, and miscellaneous publications relating to Rebay's work and the exhibitions she organized at the Museum of Non-Objective Painting will also be on view.

After New York, the exhibition travels to Schlossmuseum Murnau and Museum Villa Stuck, Munich, in Germany and will be shown simultaneously in two parts from September 8, 2005 to January 15, 2006. Rebay's early life and career in Europe will be the focus of the presentation in Murnau, while her life and career in the United States after she moved to New York in 1927 and a selection of works in Solomon Guggenheim's collection at the time of the 1939 exhibition Art of Tomorrow will be featured in Munich. After the Bavarian venues, the exhibition travels to Deutsche Guggenheim in Berlin from May 4 to July 30, 2006.

The exhibition is accompanied by a catalogue fully illustrated in color and with essays by the curators; noted scholars Vivian E. Barnett and Robert Rosenblum; and Hilla Rebay's nephew Roland von Rebay, an architect who apprenticed under Frank Lloyd Wright.

As part of the Guggenheim's educational program, documentary filmmaker Sigrid Faltin's The Guggenheim and the Baroness: The Story of Hilla Rebay will be screened daily outside the exhibition galleries. On May 31, Eleanor Munro, Linda Nochlin, and Robert Rosenblum recall Hilla Rebay and the Museum of Non-Objective Painting in an informal panel discussion. Further, Hilla Rebay's commitment to non-objective art extended to the realm of film, and her support of the work of avant-garde filmmakers attested to her belief in the power of the moving image. She organized many â€œFilm Concertsâ€ in which works by Viking Eggling, Oskar Fischinger, Norman McLaren, and Hans Richter were featured. On June 8, John G. Hanhardt, the Guggenheim's Senior Curator of Film and Media Arts, presents films from these original programs and situates the work within the context of avant-garde cinema.

Major sponsorship of this exhibition is provided by Deutsche Bank.

This exhibition is also made possible by The Hilla von Rebay Foundation.

Some galleries may close prior to 5:45 PM Saturdayâ€“Wednesday (8 PM Friday)