The Genius of the Place. The exhibition is organized in 3 parts: a choice of works from the collection, a dialogue between works contemporary and old, and an incorporation of the contemporary works in certain parts of the Palais des Ducs. This project has offered a chance to invite several international artists to produce site specific projects. So the works from the collection on view will help visitors to broach, in very different ways, the manner in which the artists involved have perceived the notion of space. Works by John Armleder, Pedro Cabrita Reis, Luciano Fabro, Steven Parrino, Xavier Veilhan, Lawrence Weiner and many others 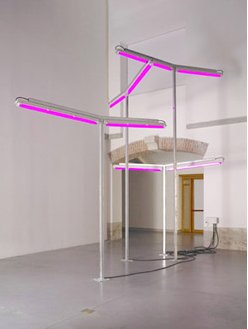 The Genius of the Place

Organized by: Dijon Museum of Fine Arts and Frac Bourgogne

The Museum of Fine Arts in Dijon has invited the Burgundy Regional Contemporary Art Collection [FRAC Bourgogne] to put on an exhibition from 17 June to 26 September 2005. This will be the second time that Museum visitors will be able to discover such a major selection of works from this collection, the previous occasion having been the exhibition Bricolage?, held in 2000. The FRAC Bourgogne has responded to this invitation with a selection of some 50 works, brought together under the title Le gÃ©nie du lieu/The Genius of the Place, and intended as a very broad examination of space.

The exhibition is organized in three parts: a choice of works from the collection in the temporary exhibition rooms, a dialogue between works contemporary and old, and an incorporation of the contemporary works in certain parts of the Palais des Ducs. This project has also offered us a chance to invite several international artists to produce works specifically for this event.

This second joint venture between the two Dijon institutions marks an opportunity to further develop the dialogue between their collections by way of the many different links existing between the work of art and space. The particular feature of this exhibition is thus based on the linkage made between the preoccupations of both institutions. On the one hand, it illustrates one of the main themes of the FRAC Bourgogne's current acquisitions and exhibition policy, to wit, the relation to space, be it space formatted by architecture, or the coded space of the city, or even the historical space of the heritage. On the other hand, this issue of the reading and construction of a place is shared by the Museum of Fine Arts which is involved in a line of thinking about the renovation of its own premises--and spaces.

As the title suggests, The Genius of the Place conveys the determined desire for a dialogue with a site, and first and foremost the site of the museum. So the works from the collection on view in the temporary exhibition rooms will help visitors to broach, in very different ways, the manner in which the artists involved have perceived the notion of space. By means of painting, sculpture, and installations, as well as the use of sound and projection, these works have a close link with the place accommodating them, constructing specific spaces but ones which also bring in the onlooker's body.

The Genius of the Place conjures up both the physical and architectural realities of the Palais des Ducs and its social and historical dimensions. This is why the contemporary works see the Palais not only in terms of its present-day museum function, but also on other levels of meaning. They interfere in different parts of the Palais, turn by turn echoing the ducal kitchens, the Chapelle des Elus, and the Philippe Le Bon Tower, in order to emphasize their architectural character and the effect of presence, and also to come up with a counterpoint. This relation to the history and prestigious site of the Palais des Ducs has also prompted us to invite artists to produce specific works for the Gabriel stairway, the Bellegarde room, and the Wedding Room. The way artists look at the architecture of the city and its citizens, at the rituals of mourning and wedlock, at the connection between interior and exterior are all proposals for experiencing the diversity of the various relations to the site. The exhibition thus makes it possible for artists already present in the collection to come up with new works. This is why The Genius of the Place is an opportunity for the two institutions to take up a major challenge: the one presented by putting contemporary works--with all their particular features and their limitations--into a place where old works address the present: the museum.

A catalog of the exhibition in two parts will be published in French.

This exhibition is the fruit of a partnership between the Dijon Museum of Fine Art and the FRAC Bourgogne.

Production: City of Dijon, with the backing of the Ministry of Culture (DRAC de Bourgogne) and the Burgundy regional Council.