In the new project space The Bulletin: a project by Josh Shaddock. White Room 1: videos by Greg Smith. White Room 2: elaborate drawings by Anthony Campuzano. Other People's Projects by Inventory, a collective enterprise set up by a group of writers, artists and theorists. Post No Bills: works that take the form of a poster by more than 50 international artists. The Most Beautiful Thing Today: an ongoing project by Aleksandra Mir 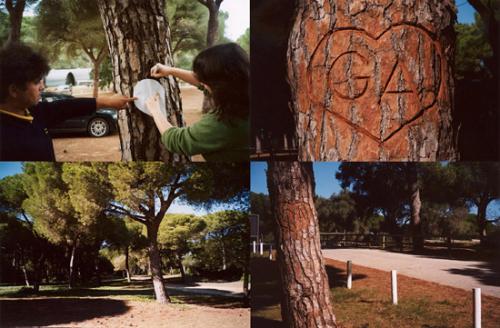 The Bulletin Board: Josh Shaddock

The third installation for White Columns' new project space The Bulletin Board - a 6' x 4' glazed aluminum bulletin board installed in our entrance lobby - is by the New York-based artist Josh Shaddock. Working in the tradition of conceptual art, Shaddock's work engages with language, everyday phenomena and quotidian objects. Shaddock's project for The Bulletin Board takes the form of a printed text (a joke) that, through its placement, cannot be read in its entirety (i.e. you miss out on the punch line). Playing off the often "incomplete" nature of art as a form of communication, Shaddock's piece slyly articulates the sense of frustration we have (probably) all felt at some time when confronted by a puzzling art work.

Josh Shaddock lives and works in New York. He is currently an MFA candidate at the School of Visual Arts, New York. Earlier this year he represented White Columns at 'Parker's International Art Market (I Am 5)' at Parker's Box in Brooklyn.

"Post No Bills" is an exhibition of (mostly recent) artist's poster works: i.e., works that either (literally) take the form of a poster, or works that adopt or approximate the language(s) and formats of posters. Given our ongoing social and political turmoil, it is perhaps not surprising that artists have increasingly returned to the polemical "space" of the poster as a vehicle for their ideas. Often democratically produced and distributed, poster works possess a sense of urgency that both amplifies and mirrors our present realities. "Post No Bills" is a cross-generational exhibition and brings together works by more than 50 international artists, many showing in New York for the first time. Available (free of charge) from the gallery will be a newly commissioned poster by Michael Smith.

White Columns is pleased to present the first solo exhibition of the New York-based artist Greg Smith. Smith's videos consider (in his own words): "... strange characters who do their best to navigate the urban environment around them. An integral part of this endeavor is building objects that hover somewhere between working mechanisms and piles of junk that they use to interact with their surroundings and with each other." Smith's videos The Shoe and the Umbrella, 2004, and the recently completed Gargoyles, 2005 - which will debut at White Columns - riff on the legacies and traditions of surrealist cinema and situational comedy (Jacques Tati immediately comes to mind), whilst simultaneously exploring the claustrophobic nature of life in the metropolis.

Greg Smith lives and works in New York. Smith received a Ph.D in Physics from Harvard University in June 2000, before enrolling in the MFA program at Hunter College, from where he graduated in January 2005. Smith's works have been shown recently at the Hudson Valley Center for Contemporary Art, and at the Museum of Modern Art, New York as a part of their "Premieres" screening series. This summer his work can also be seen in the group show Hunch and Flail curated by Amy Sillman at Artists Space, New York.

White Columns is pleased to present the first New York exhibition by the Philadelphia-based artist Anthony Campuzano. Working primarily with language, Campuzano's works - often densely layered, elaborate drawings - explore the thresholds of history, politics, literature, and popular culture, with a view to - in the artist's words: "slowing down the daily flow of information, and putting a magnifying glass on it." Central to his White Room exhibition will be Campuzano's most expansive work to date: Portrait of Mae Brussell, 2005, a twelve panel drawing that explores the entwined lives of Brussell - the celebrated anti-fascist, broadcaster and I. Magnin heiress - and Lee Harvey Oswald. (Brussell had attempted to track down Oswald's every last utterance - in an attempt to present a more complete picture of the circumstances of both Oswald's life/death and the Kennedy assassination.) The work, in its twelve parts, adopts a format inspired by Campuzano's exposure to Barnett Newman's Stations of the Cross in the Philadelphia Museum of Art. Like Robert Smithson's 1966 drawing A Heap of Language, Campuzano's works collapse and fragment conventional narratives, preferring instead less defined and more porous readings.

Anthony Campuzano lives and works in Philadelphia, PA. His work has been included in group exhibitions at Fleisher/Ollman Gallery, Philadelphia; Harvard University, Carpenter Center, Cambridge, MA; @HaNNA, Tokyo; and the Ukrainian Institute of Modern Art, Chicago, IL. In 2004 he had a solo exhibition at The Players Club of Swarthmore, PA, in conjunction with their stage presentation of "The Bad Seed." Campuzano received a BFA from the Tyler School of Art, in 2000, and participated in the Skowhegan School of Painting and Sculpture in 2000.

Other People's Projects is a new, occasional programming strand at White Columns in which our project space is offered to idiosyncratic organizations, collectives, publishers, etc. to introduce their activities to a wider audience. The second project in this series is by Inventory. Formed in 1996 in London, England, Inventory is a collective enterprise set up by a group of writers, artists and theorists looking to explore the alternatives to the limitations imposed on these disciplines. Inventory operates on a number of fronts ranging from a regularly published journal (Inventory) to organized events, lectures, interventionalist strategies and exhibitions. Under a Walter Benjamin motto, "the inventory of the street is inexhaustible," Inventory proclaim a sociological trawl through the city. In acts of re-appropriation, found objects are modified, altered, written upon and carved into and the street becomes the site for defiant interventions. Acts of subjective and collective resistance to established order rally against alienated existence, consumer culture, and the regimentation of urban space. Inventory's journal Inventory exists primarily as an agitational force, concerned with ideas, content, and communication first and foremost, creating an enthused writing that penetrates the marginal and the everyday, the theoretical and the sensorial, for a readership that refuses to be crushed by this meager existence. Inventory's installation at White Columns - their first in the United States - will bring together material from a number of earlier projects including: placards from a street action held in Central London in 1999; posters from the resulting publication Smash This Puny Existence, 1999; the video Sleepwalkers, 2003, which was filmed at an "Americana" festival in central England; and a display of the complete run of their journal Inventory.

Inventory have exhibited widely in the U.K., Europe and Japan, including individual exhibitions at The Approach, London (2004, and 1999/2000); and The Modern Institute, Glasgow (1999); and in group exhibitions at the MusÃ©e d'Art Moderne, Paris (1996); Whitechapel Art Gallery, London (2000); BÃ¼ro Friedrich, Berlin (2000); Tate Modern, London (2001); and Portikus, Frankfurt (2004), amongst many others. In 2003 they were nominated for the Beck's Futures Award at London's Institute of Contemporary Art. Inventory's Smash This Puny Existence, a series of six fly-posters - commissioned by Matthew Higgs - was published by Book Works, London, in 1999. Inventory are represented by The Approach, London. The journal Inventory is available from Cornerhouse Distribution http://www.cornerhouse.org.

The Most Beautiful Thing Today - an ongoing project by Aleksandra Mir

Pitched somewhere between the banal and the sublime, Aleksandra Mir's ongoing, project for White Columns consists of written descriptions of scenarios that Mir considers to have been "the most beautiful thing" she happened to see on a particular day. Over the coming years, and following no discernable schedule Mir will occasionally replace the existing description with one that describes a more recent "beautiful thing." (The third "most beautiful thing" was recently installed.)

Aleksandra Mir lives and works in New York. Since 1996 she has been involved with more than 75 exhibitions and projects. Recent solo projects include: The Big Umbrella, P.S.1, NY, and The World from Above, greengrassi, London (both 2004); group shows include: Terminal 5, JFK Airport, New York (2004); and the 2004 Whitney Biennial.