Solo show: 30 works. The retrospective focuses on the artist's work from the past decade, exploring the period from which her work began to deploy three-dimensional space through the powerful use of material, colour and form. Her works are a hybrid of painting, sculpture and installation and give expression to the artist's preference for materials that are changeable. 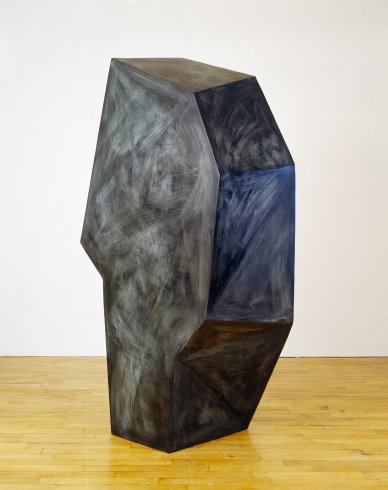 An exhibition of some 30 works by the American sculptor Catherine Lee opens to the public at the Irish Museum of Modern Art on Wednesday 22 June 2005. Entitled Catherine Lee, this small retrospective focuses on the artist's work from the past decade, exploring the period from which her work began to deploy three-dimensional space through the powerful use of material, colour and form.

Catherine Lee's works are a hybrid of painting, sculpture and installation. Juxtaposing the simplicity of a repeated form with an astonishing variety of materials, they give expression to the artist's preference for materials that are changeable, for "anything that has been in a liquid state - clay, concrete, fibreglass, all sorts of metals. I have difficulty with wood, because it begins as one thing and remains that thing. Mutability is what interests me". Her small table-top objects, such as White Cubic, 2004, made of fired clay have a delightful fluidity, which can also be seen in the glazed surfaces of Russian Cubic, 2005 and Red Cubic Copper, 2005, with their almost watery shimmer.

Lee's work is frequently presented in groups or "families", ranging from simple wall pieces to large formal arrangements comprising a number of separate elements. In this exhibition, however, the families have been dismantled and the works are displayed chronologically, giving a clear overview of the development of her work since the mid-1990s. Lee began her career as a painter and her wall sculptures, mostly dating from the late 1980s, could be seen as a continuation by other means of her early interest in two-dimensional works.

Her free-standing sculptures, mark an acceleration of this process. In Union Two, 1992, a figure reaching upwards seems to cast a shadow above and behind it, simultaneously embracing and threatening the very figure which created it in the first place. Lee's recent large-scale bronzes, The Hebrides Series, which will be shown in the courtyard at IMMA, mark the latest stage in this evolution. Several of the artist's works also evoke tribal artefacts, such as shields and masks. Archaic Figures, 2004, comprises eight glazed shapes closely resembling broad-bladed knives, although the material from which they are made might also suggest serving trays.

Above and beyond all of this writer Nancy Princenthal, in her catalogue essay, describes the central quality of Lee's work as an ability to dissolve the distinction between the animate and the inanimate. "From her most intimate table-top ceramic objects to the large free-standing bronze sculptures, Lee's work is endowed with a presence that is simultaneously geological and human. Indeed, although all sculpture can be said to participate in the fourth dimension . . . Lee's sculptures cross a further threshold between still imagery and moving pictures; their painterly surfaces and distinct, eccentrically shaped facets create isolated images that assemble themselves, as one engages with them I turn, into almost filmic sequences".

Born in Texas in 1950, Catherine Lee first exhibited in New York at P.S.1 in 1980 and since then has participated in numerous exhibitions internationally. Her exhibition, The Alphabet Series, was shown in Texas, Washington, Connecticut and Pennsylvania. More recently her work has been shown in Barcelona, Salzburg, Milan and Copenhagen. Her work is included in the collections of SFMOMA, San Francisco; the Museum of Modern Art, New York; Tate, London, and the Carnegie Institute, Pittsburgh.