Artists from tropical (and less tropical) parts of the globe whose work revolves around the notion of 'the tropical'. In 1968, Helio Oiticica expressed his doubts about a new trend in the arts in an article entitled Tropicalia. This 'Tropicalism', appropriated tropical elements on a superficial level without taking the difficulty of representing a culture into account. Nowadays, there seems to be another wave of 'Tropicalism'. The exhibition tries to explore what Homi K. Bhabha calls the space of hybridity. Playing with the cliches, this younger generation of artists emphatically focuses on the possibilities of abstraction. 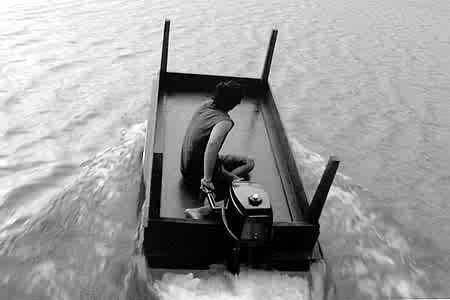 In 1968 the Brazilian artist HÃ©lio Oiticica (1937-1980) wrote an article entitled â€˜TropicÃ¡liaâ€™ in which he expressed his misgivings about a new trend in art. This â€˜tropicalismâ€™, as he called it, appropriated tropical elements in a superficial manner, without taking proper account of the difficulty of representing a culture.

Today, a new wave of â€˜tropicalismâ€™ seems to be washing over the art world, fuelled by the interest that has been kindled in the West in contemporary art from South America - being the latest region to â€˜discoverâ€™. Exhibitions have mushroomed for which the only selection criterion is the artistsâ€™ nationality or ethnicity.

Tropical Abstraction is a group exhibition that tries to get away from geographical and ethnical dividing lines by focusing on the problem of representation. Those taking part show that every representation of a particular place is a personal, fictitious construct (and hence an abstraction) that is by its nature temporary, coloured by experiences originating in the different continents between which the artists move.

Instead of the customary platitudes and historical narratives about the tropics, the exhibition provides unexpected, hitherto neglected, or underground images. For instance, JesÃºs Bubu NegrÃ³nâ€™s photo of the chimney of a sugar factory recalls a time when Puerto Ricoâ€™s economy depended on the sugar industry instead of tourism. Armando Andrade Tudela cites an anonymous â€˜modernistâ€™ sculpture that he discovered in the north of Peru and that was placed there some forty years ago as a monument to the pre-Inca culture of Chankillo. The geometrical forms of this block sculpture recall modernism, which seems a rather anomalous imagery in which to record the indigenous culture. Andrade abstracts the sculpture by reconstructing it in wood and presenting it in a fragmented way. The other artists whose work is shown also have their own critical and evocative ways of investigating the relationship between abstractions and the tropics.

Tropical Abstraction is sponsored by the Mondriaan Foundation, the National Fund for the Visual Arts, Design and Architecture (BKVB Fund), the US Embassy in The Hague, the Netherlands-America Foundation, and BEYOND-Leidsche Rijn / Nomads in Residence (residency JesÃºs Bubu NegrÃ³n).