An Assortment of Beauties

Japanese Woodblock Prints Collected by Frank Lloyd Wright. The exhibition features the work of many of Japan's leading artists in the medium of woodblock printmaking. All of the prints included in this exhibition were once owned by the celebrated American architect Frank Lloyd Wright (1867-1959), who was a spirited collector of Asian art. 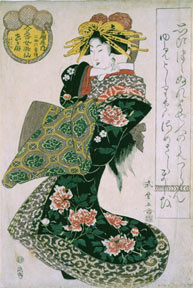 Pasadena, CA- An Assortment of Beauties: Japanese Woodblock Prints Collected by Frank Lloyd Wright features approximately 15 prints devoted to scenes and portraits of beautiful women. Organized by Assistant Curator Christine Knoke, this exhibition features the work of many of Japan's leading artists in the medium of woodblock printmaking. All of the prints included in this exhibition were once owned by the celebrated American architect Frank Lloyd Wright (1867-1959), who was a spirited collector of Asian art.

The Exhibition
The theme of beautiful women is one component of a school of Japanese picture making known as ukiyo-e, which can be translated as 'pictures of the floating world.' Beautiful women (bijin) are depicted alone as well as in small and large groups, entertaining themselves by playing games, preparing themselves for the night, or promenading through the city with their attendants or children. During the Edo Period (1600- 1868), ukiyo-e became immensely popular due to the blending of classical Japanese aesthetics with contemporary urban themes. Ukiyo-e celebrated the hedonistic world inhabited by geishas and courtesans, as seen in the prints on view in this exhibition, and by the famous Kabuki actors.

Wright began purchasing Japanese prints around 1900 while living in Chicago, but expanded his collection greatly during his many trips to Japan between 1905 and 1922. He continued to buy and sell prints until his death in 1959. The Norton Simon Museum's permanent collection contains more than 350 prints from Wright's collection, which he amassed over a period of 50 years.

Exhibition-Related Programming
On July 29, 2005 at 7:00 p.m., author and scholar Kathryn Smith presents Collector, Dealer and Architect: Frank Lloyd Wright and Japanese Prints. This lecture summarizes WrightÂ¹s activities as a major American collector of woodblock prints and provides insight into his architecture and how Wright incorporated Japanese aesthetics into his own designs.

On September 10 and 17, from 10:30 a.m. to 12:00 p.m., Dr. Kendall Brown, Associate Professor of Asian Art History, California State University, Long Beach will present an adult education course delving into the cultural context of Japanese prints. The per session fee of $15 includes admission to the galleries on the day of the class.

In addition, the Hammer Museum at the University of California, Los Angeles is holding a concurrent exhibition entitled Frank Lloyd Wright and the Architecture of Japanese Prints; on view from October 22, 2005 to January 22, 2006

The Norton Simon Museum
The Norton Simon Museum is located in Pasadena on the corner of Orange Grove and Colorado Boulevards at the intersection of the Foothill (210) and Ventura (134) freeways. The Museum is open every day except Tuesday, from 12 noon to 6:00 p.m., and 12 noon to 9:00 p.m. on Friday. Admission is $8.00 for adults and $4.00 for seniors. Members, students with I.D. and patrons ages 18 and under are admitted free of charge. The first Friday of every month from 6:00 to 9:00 p.m. is free for all visitors. The Museum is wheelchair accessible. Free parking is available and no reservations are necessary.