Hunting-ground. In large scale compositions of intriguing visual complexity, the artist combines pictorial elements such as text and figure with plain surfaces of geometrical colourfields. Similar to how a collage is constructed by addition of various elements and materials, he builds up his compositions with a succession of dense layers. 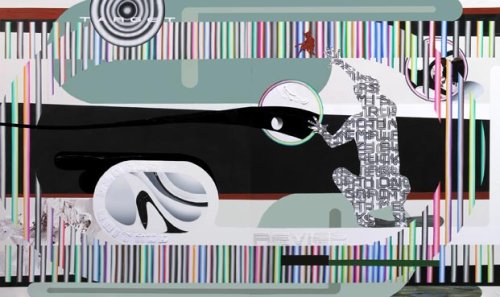 Concurring with the Art Alarm program of the City of Stuttgart, Galerie Reinhard Hauff is pleased to announce its first one-man show by the Cologne painter Frank Ahlgrimm (*1965), who studied at the Stuttgart Art Academy until 1998. In large scale compositions of intriguing viisual complexity, Ahlgrimm combines pictorial elements such as text and figure with plain surfaces of geometrical colourfields. Similar to how a collage is constructed by addition of various elements and/or materials, Ahlgrimm builds up his compositions with a succession of dense layers. The compact, high-tech surface texture contrasts with the fast moving effects of signs and symbols derived from/or ressembling commercial logoÅ’s, media and advertisement slogans applied with thick, gestural brushstrokes. Text and figure work together - not as a statement or comment on each other, but as seemingly random ornament only subliminally comprehensible: a kneeling figure is formed by a patch of text fragment, or a text fragment is contained within a distorted geometric shape.

In the exhibition 'hunting-ground', Ahlgrimm shows a selection of his latest works, taking the background flicker and striped colour synchrony correction band on the TV monitor as a painted point of departure and frame of reference for floating spaces, where figural motives reduced to their outline shapes overlap. The structural affinity to TVÅ’s flickering, fleeting and cramped picture frame is represented in AhlgrimmÅ’s compositions by hovering, vibrating, candy-colourbands contrasting optically to the meticulously smooth, muted surfaces of the pastel coloured background areas. Reflecting an ongoing search for new esthetic effects, AhlgrimmÅ’s paintings compress information to create unique, synthetic pictorial universes. They become coded bearers of media- reality and the muptiple possibilities of 'seeing' to which we have now become accustomed through digital manipulation programs such as photoshop. 'When is your point of no return?' is the title of one of the paintings in the show, but also a commentary on AhlgrimmÅ’s working methods. Ahlgrimm experiments with new pictorial territory and takes his manipulation of form and colour close to a point where visual legibility dissolves - just to that point where the tension between elements juxtaposed on the canvas will still hold the composition together.