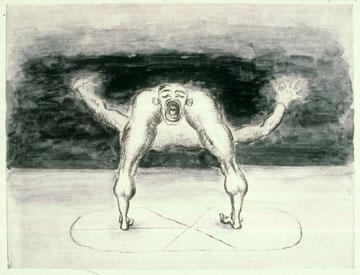 International Print Center New York and the Kolodzei Art Foundation announce the presentation of Moscow Grafika: Artists' Prints 1961 - 2005-- Selections from the Kolodzei Collection of Russian and Eastern European Art. The exhibition will be on view from September 13th-October 22nd, 2005 in IPCNY's gallery at 526 West 26th Street in Chelsea. The Opening Reception will be held on Thursday, September 22nd, 6-8 p.m. Moscow Grafika is the first exhibition of prints from the Kolodzei Collection and the first showing of the graphic work of many of the artists in the United States. Moscow Grafika has been guest curated for IPCNY by Natalia Kolodzei. A curatorial essay by Ms. Kolodzei will accompany the exhibition.

Moscow Grafika includes more than fifty works by thirty artists in various mediums of printmaking including linocut, etching, screenprint, monotype and lithography. Dating from 1961 through the present, the work represents historic trends in non-conformist art as well as current exploration of traditional and digital mediums in printmaking by artists working in Moscow.

Several generations of non-conformist and independent artists are represented in the exhibition. Ranging in age from thirty-five to seventy-five, they include those who began their careers during Khrushchev's "thaw" of the 1960's and 1970's who took part in the first unofficial exhibitions; artists who began working in the perestroika (late 1980's) and the post-perestroika periods; as well as artists who entered the scene more recently during the post-Soviet years.

Moscow Grafika: Artists' Prints 1961 - 2005-- Selections from the Kolodzei Collection of Russian and Eastern European Art will trace the tortuous progress from the beginning of artistic liberation in the post-Stalin years, through the stagnation of the Brezhnev years and the hopefulness of the Gorbachev years, to the many new directions in contemporary art today.

Curatorial talks by Ms. Kolodzei will accompany the exhibition. Topics such as recent developments in print publishing in Moscow and the history of non-conformist art will be addressed.

International Print Center New York is a 501(c)(3) non-profit institution dedicated to the appreciation and understanding of the fine art print. IPCNY nurtures the growth of new audiences for the visual arts while serving the print community through exhibitions, publications and educational programs.

The Kolodzei Art Foundation, Inc., a 501(c)(3) not-for-profit institution, organizes exhibitions in museums and cultural centers in the United States, Russia and other countries, utilizing the considerable resources of the Kolodzei Collection of Russian and Eastern European Art. The foundation also provides art supplies to Russian artists and organizes Russian-American cultural exchanges.

The Kolodzei Collection of Russian and Eastern European Art consists of 7,000 art objects of which several thousand are etchings, lithographs, screenprints and digital prints. The work of more than 300 artists from Russia and the former Soviet Union is included. The collection includes paintings, drawings and sculptures in addition to works in the print medium.