Beyond: an extraordinary space of experimentation for modernization. The Triennal focuses on the research and reflection on modern developments, and presents the expression of artists, architects, and scholars. The new established structure D-Lab guarantees a platform for sustainable and evolving research, creation and cultural exchanges. Curated by Hou Hanru, Hans Ulrich Obrist and Guo Xiaoyan. 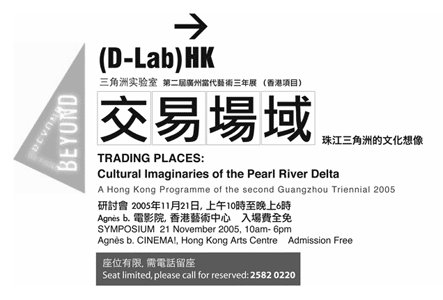 Beyond: an extraordinary space of experimentation for modernization

On Nov. 18th, 2002, the first Guangzhou Triennial organized by Guangdong Museum of Art was held in Guangzhou City, China. The theme then was Reinterpretation : a decade of experimental Chinese art, which aimed at a historic review and academic interpretation of the experimental Chinese art since the 1990â€™s. This first Guangzhou triennial has produced considerable influence in both Chinese and overseas artistic circles. Now the second session of Guangzhou Triennial is ready to unfold in Nov, 2005 as a regularly-held international art event.

The theme â€”â€” BEYOND : an extroardinary space of experimentation for modernization The curatorial team of the Second Guangzhou Triennial consists of internationally renowned curators Hou Hanru, Hans Ulrich Obrist and the museumâ€™s in-house curator Guo Xiaoyan. They have come up with an extraordinary title for the event: Beyond.

â€œBeyondâ€ refers to various forms of special cultural and artistic phenomena and methods developed under new social and economic circumstances that are unique, flourishing and full of vitality. These phenomena and methods embody the exciting and complicated imprints of globalization; they represent those specific solutions and patterns created and adopted by China and other non-western countries in their own process of modernization; they are an ever-changing dynamic phenomenon.

â€œAn extraordinary space of experimentation for modernizationâ€ takes the Pearl River Delta (PRD) as one of the typical developing regions to study the contemporary art within the extraordinary modernization framework that is full of possibilities and confusion. Pearl River Delta (PRD) stands for new space strategies, economic patterns and life styles. We regard this â€œextraordinary spaceâ€ as a platform for artistic experimentation and practice. At the same time, this also evokes a unique and inventive experimental sample.

Therefore, the second Guangzhou Triennial focuses on the research and reflection on those â€œextraordinaryâ€ modern developments, and presents the â€œextraordinaryâ€ expression of artists, architects, and scholars. To achieve such a vision, we have established a new structure, the cross-space, cross-time, cross-cultural, and inter-disciplinary Delta Laboratory (D-Lab). It guarantees a platform for sustainable and evolving research, creation and cultural exchanges. Tens of international and Chinese artists, architects and cultural activists have been invited to the PRD area to carry out studies and exchanges, and further realize specific projects for the Triennial exhibition. As the core of the Triennial, â€œD-Labâ€ has already held 3 major labs with over 10 public presentations. The related documents will also be edited and published. This strategy emphasizes expansions and continuations in both time and space. It fundamentally subverts conventional exhibition curatorial models and allows the globalised contemporary art activities intimately fused with the local context and deeply influencing its future development. Thurs, this Triennial has become a process of creating new realities for the very locale itself.

Besides D-Lab, The second Guangzhou Triennial also consists of the Main Exhibition, Self Organization, and Special Projects. They will be opened on November 18th 2005 in Guangzhou with Guangdong Museum of Art as the main venue. The event will last till Jan. 15th, 2006, while the D-Lab Project will go on at the same time.

Started on Nov. 28th, 2004, the D-Lab aims at providing a platform for academic dialogues, exchanges, and brain-storming. The time spans through Nov 2004 to Jan 2006. During the 3 years, the D-Lab session is held every 2-3 months. Some D-Lab participants will later be invited to exhibit their works at the second Guangzhou Triennial.