Examines mechanical reproduction and seemingly analog approaches to art-making in our contemporary digital world. Nostalgia will take a back seat as the show looks at the paradoxical interplay between analog and digital. Works by 8 artists, curated by Max Henry 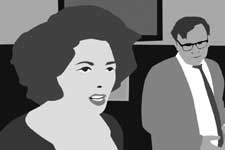 Culturally altered for better or worse, every day we are steps closer to the cyber-fictional world of man/machine. From 20th century analog bulk-mass and "slowness" to early 21st century speed and compactness, this transition hurtles us forward. At some point in the near future the analog world of the 20th century will be a distant memory....

Nostalgia will take a back seat as The Last Generation looks at the paradoxical interplay between analog and digital.

In the included works: The body is represented as a robotic tool that receives commands from an unknown source, coldly executing movements that (strangely) emote human neuroses / Text references hypertext, physical aberrations of mass produced signage, and the structure of words as thought in constructed form and connotation / The propagandistic visual sound-bytes of the media are enlarged to a colossal scale, compounding their power to induce fear and awe / The retrieval of dreams from the database of the unconscious underscores the encoded narrative of sleep cycles and the search for their meanings / Simply animated characters move with analog-like slowness like our lowest common denominator, the consuming television viewer / A vortex of complexly layered pop imagery references western philosophers, numerology, cognitive association, and spatial perception, mirroring the brain’s synaptic response to a flood information and our ability to process it / Eastern mysticism and metaphysical transcendence are evident in the landscape where a person dematerializes. Is this a romantic gesture or a hallucinatory moment in the virtual?