The installation 'Distance' by Jeppe Hein explores his interest in art as a game. As the viewer enters the exhibition space, he activates a sensor that shoots a large white ball along the rails along which it will roll through twists and turns in the gallery space. 'EyeShadow' is a narrative installation by Bozidar Brazda; the video, watercolors and sculpture hint at a plot involving Danish punks in search of the vanished star of a banned Eastern Bloc film. 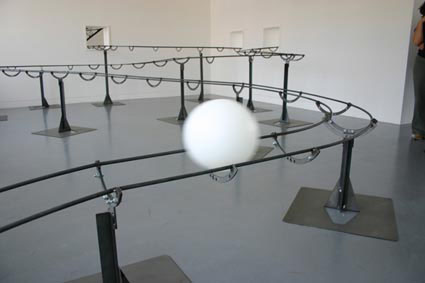 Distance, an installation by artist Jeppe Hein, will be on view at The Moore Space in Miami from December 1, 2005-March 10, 2006. Created in 2004, the installation has been shown at Ludwig Forum, Aachen, Germany, and most recently, at Dunkers Kulturhus in Helsingborg, Sweden. The guest curator of this exhibition is Christine Macel, Curator of Contemporary art in charge of the Department of Prospective and Contemporary Creation, Musee nationale d’art moderne, Centre Pompidou, Paris.

Configured as a rollercoaster, Distance explores Hein’s interest in art as a game. Consisting of a set of rails roughly 330 feet in length, Distance dips and rolls, continually switching back on itself in loops. The installation adapts in size and shape for different exhibition venues. As the viewer enters the exhibition space, he/she activates a sensor that shoots a large white ball along the rails along which it will roll through twists and turns in the gallery space. The viewer is able to follow the ball’s course by foot, tracing its movement across the gallery and at the same time, becoming an active participant in the installation.

Hein revels in exploiting the deceptive potential of his work. His installations can best be described as interventions since they introduce disturbing elements into neutral art venues or public spaces that destabilize the art viewing habits of the gallery visitor. The pared-down geometrical objects in these installations obey the formal principles of minimal or conceptual art, but in keeping with Duchampian tradition, they become real works of art when the viewer innocently activates them. Hein’s objective is to establish an incongruous dialogue between the art and the viewer and to use humor to broaden the limits of conceptual art.

Born in 1974 in Copenhagen, Jeppe Hein studied at the Royal Academy of Arts of Copenhagen and in the Hochschule fur Bildende Kunste of Frankfurt. He lives and works in Berlin. He will have a solo exhibition at the Centre Pompidou, Paris in the Fall of 2005. In addition, Hein has shown at the Venice Biennial in 2003 and at PS1 in New York.

A group of disheveled teens spill in through a false front entrance. They are dressed in long, shapeless woolen knits (mostly in muted rainbow tones), worn jeans and muddy boots. Boys and girls (distinguishable only by the pitch of their voices)whisper in a language that the viewer decides is Danish (sub-titles may appear to those who choose to ingest the root * once it is ground up and added to cassis and wine). “Nar vi finder hende, skal vi feste!" calls out a girl. “Hvorfor vente?" responds her friend. He steps into a separate room and inspects a large watercolor. He drags his finger across its frame and listens closely for the whir of some hidden black camera beneath the glass and drywall. Just then a small burst of applause is heard emanating from a room where a plaster actress is sleeping (is this their vanished actor or just some effigy?). Her blonde hair is up in a Crown braid and a gold chain hangs from her make-up mirror (this means more ‘shrooms, pink pills, and maybe even a jammed-up Soviet era handgun if they decide to steal it!). Meanwhile, frantic music (Lost Kids? Sods? Kalashnikov?) pours out from the gallery’s projection room. They flop to the floor in a pile and are positioned just so, handsomely as it were. Bottles of wine are passed around and militant mottos ring-out before each sip. A pulse of red/green light washes over them. And each one is now like the next, a colored shadow. etc.etc.

EyeShadow, a new, mixed-media work by New York based artist Bozidar Brazda, will be on view at The Moore Space in Miami from December 1, 2005-March 10, 2006. This is the latest installment in a series of overlapping, narrative installations that Brazda has been developing over the past two years. The video, watercolors and sculpture in EyeShadow hint at a plot involving Danish punks in search of the vanished star of a banned Eastern Bloc film.

The Moore Space is a non-profit arts organization dedicated to multi-disciplinary contemporary art practices. It offers a year-round program including exhibitions, educational programs, internships, artist residencies, lectures, and performances. Since its founding in 2001 by collector Rosa de la Cruz together with Craig Robins, an integral part of its exhibition program has been to invite guest curators to contribute new ideas and new thought to the organization and the Miami arts community at large. The sponsors include: Rosa de la Cruz, Craig Robins and Miami-Dade County Department of Cultural Affairs, Cultural Affairs Council and The Mayor and the Miami-Dade Board of County Commissioners.

The Moore Space
Miami’s Design District, 4040 NE 2nd Avenue, 2nd Floor.
Hours: Wednesday-Saturday from 10 am to5 pm, and by appointment