Geometric abstraction has never ceased to fascinate by its intellectual rigour and formal purity; the exhibition 'Supernova' brings together a group of works by contemporary British artists which examines the evolution and continuing relevance of this genre in the 21st century. Largely comprising paintings, the exhibition also includes projection works. Our space is packed with various waves, not registered by our eyes; thus, we live in an invisible world. This is the starting point for the installations Gints Gabrans. 'Emission 2005: Darius Ziura', the artworks displayed were created while the artist was traveling to remote villages in Lithuania and taking the pictures of girls whom he encountered during his trip. 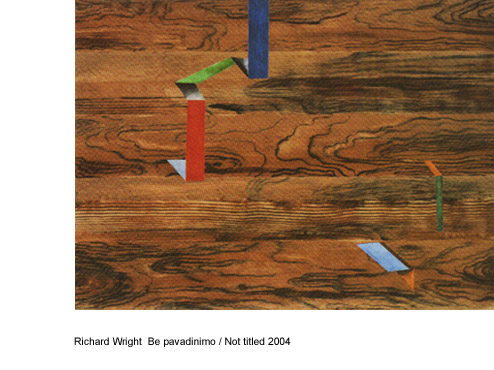 The high-water mark of Modernist theory in the early twentieth century, geometric abstraction has never ceased to fascinate by its intellectual rigour and formal purity.

Supernova brings together a group of works by contemporary British artists which examines the evolution and continuing relevance of this genre in the 21st century.
The youngest of the artists represented in Supernova, Toby Zeigler and Dan Norton use digital technology to a greater or lesser degree, as a new means of exploring the formal spatial and architectural concerns which have always been central to this form of abstraction. In the early years of the machine age, geometric abstraction spoke of absolutes of modernity, both technological and ideological. In the same way as Piet Mondrian’s iconic Broadway Boogie Woogie (1942) has been seen as a celebration of the vibrant modernity of New York, these younger British artists forefront new media techniques in their re-figuring of this genre for a new era.

Artists from a previous generation in the exhibition such as Gary Hume and Keith Coventry made ironic reference to early 20th century abstraction. In Coventry’s case the references to Suprematist painting served to illustrate the failure of utopian discourses. Similarly, Jane and Louise Wilson’s projection Monument (Apollo Pavilion, Peterlee, 2003) features Victor Pasmore’s sculpture for the post-war new town: an unloved relic of an era of confidence in an egalitarian future. By contrast, Liam Gillick’s work suggests a continuing optimism in the positive social influence of the built environment.

Supernova features 13 artists, with work covering the past decade. Largely comprising paintings, the exhibition also includes projection works. Works in the exhibition have been drawn from the British Council collection, private lenders and other collections.

Solo exhibition of the prizewinner of the Hansabank Art Award of the Baltic Countries. Hansabank continues its cooperation with the Estonian Center for Contemporary Arts through a comprehensive arts support program. Until 2003, the art award was conferred only on Estonian artists (Marko Laimre, 2000; Ene-Liis Semper, 2001; Marko Maetamm, 2002). Starting in 2003, nominations were received from all three Baltic countries (the 2003 Award Winner was Lithuanian artist Arturas Raila). Gints Gabrans's works are based on an analysis of power and the values of mass media.

The artworks displayed in this exhibition were created while the artist was traveling to remote villages in Lithuania and taking the pictures of girls whom he encountered during his trip.
This is a collection of glimpses of contemporary Lithuania. The portraits have been created with minimal resources, without any use of additional light and artificial constructing of reality. According to the artist, he merely records everything around him trying to be as neutral with regard to the observed reality as possible. Although the images are absolutely objective, they do not aim at definite conclusions and leave enough space for conscious imagination. This is a unique research balancing between objectivity and 'documentary' fiction.

Started in 2004 a series of monographic exhibitions called EMISIJA (EMISSION) introduces the most important Lithuanian artists who during the previous decade have constituted a new language of contemporary Lithuanian art. These artists have received a rich attention from the critics; they have participated in the important local contemporary art exhibitions and have represented Lithuania abroad on numerous occasions.