The Prints of Otto Dix 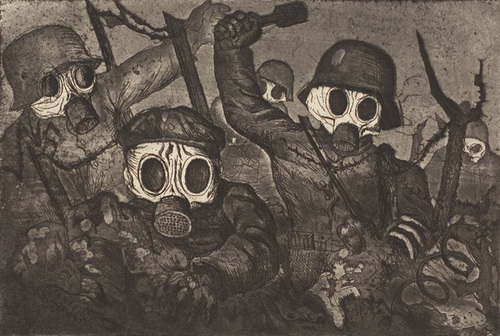 War: the prints of Otto Dix opens at the National Gallery of Australia on Saturday 17 December. Der Kreig (War) 1924 is a series of 51 etched prints that will be showcased in the exhibition, documenting Otto Dix’s experiences in the First World War. It has been described as one of the most powerful and the most unpleasant anti-war statements in modern art. "I did not paint war pictures in order to prevent war. I would never have been so arrogant. I painted them to exorcise the experience of war. All art is about exorcism." - Otto Dix

Otto Dix was born in 1891 in Untermhausen, Thuringia, the son of an ironworker. He initially trained in Gera and at the Dresden School of Arts and Crafts as a painter of wall decorations, and later taught himself how to paint on canvas. He volunteered as a machine-gunner during the First World War and in the autumn of 1915 was sent to the Western Front; he was at the Somme during the major allied offensive of 1916. During the war he was wounded a number of times, once almost fatally.

War profoundly affected Dix, and as an artist he took every opportunity, both during his active service and afterwards, to document his experiences. These experiences would become the subject matter of many of his later paintings, and are central to the Der Krieg cycle.

Explaining why he volunteered for the army in the First World War, Dix said: ‘I had to experience how someone beside me suddenly falls over and is dead and the bullet has hit him squarely. I had to experience that quite directly. I wanted it. I’m therefore not a pacifist at all - or am I? Perhaps I was an inquisitive person. I had to see all that myself. I’m such a realist, you know, that I have to see everything with my own eyes in order to confirm that it’s like that. I have to experience all the ghastly, bottomless depths of life for myself.’

Dix consciously modelled Der Krieg on Goya’s equally famous and devastating Los Desastres de la Guerra (The disasters of war), first published in 1863. This work detailed Goya’s account of the horrors of the Napoleonic invasion and the Spanish War of Independence from 1808 to 1814.

While Dix’s work certainly documents the horrors of war, there is a paradoxical quality of sensuousness about it, an almost perverse delight in the rendering of horrific detail, which indicates that there was perhaps, in Dix’s case, an almost addictive quality to the hyper-sensory input of war - something that would be familiar to any war correspondent.