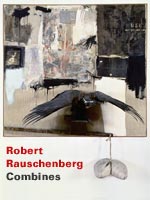 The selection of wall-hung and freestanding Combines in the exhibition highlights Rauschenberg's best-known work, as well as some of his rarely seen or unknown objects. In these works, Rauschenberg reinvented collage, changing it from its role as a medium that presses commonplace materials to serve illusion into something very different: a process that undermines both illusion and the idea that a work of art has unitary meaning.

The exhibition is made possible in part by Jane and Robert Carroll and the Wasserstein family.

Corporate support has been provided by Merrill Lynch.

The exhibition was organized by The Museum of Contemporary Art, Los Angeles, in association with The Metropolitan Museum of Art, New York.

Gary Tinterow, Engelhard Curator in Charge of the Metropolitan Museum's Department of Nineteenth-Century, Modern, and Contemporary Art, stated: "Robert Rauschenberg: Combines looks at this legendary American master at a particular moment in his career - a moment that signaled a revolution in the history of American art. All subsequent artists who have toyed with or rejected narrative, questioned the notion that art had to present a window onto a more orderly world than our own, or added a new sensitivity toward the grid in modern art, may trace their inspiration to Mr. Rauschenberg's Combines."

"Merrill Lynch is proud to sponsor Robert Rauschenberg: Combines, a dynamic exhibition showcasing the artist's unique interpretation of collage," said Claudia Kahn, Merrill Lynch Senior Vice President, Public Policy and Corporate Responsibility. "A long-time patron of innovative arts and educational programs, we support the Metropolitan Museum of Art in their commitment to bringing important exhibitions to the communities where our clients and employees work and live."

On the occasion of the exhibition, the Metropolitan Museum has acquired - jointly with the collector Steven A. Cohen - its first painting by Rauschenberg, Winter Pool (1959). The work, which will be included in the exhibition, features two panels of equal height - six feet and three inches - but unequal width, joined together by a wooden ladder that stands on the floor against the wall between the paintings.

Rauschenberg's enthusiasm for found materials and his rejection of the angst of the Abstract Expressionists, whose work dominated the vanguard in American art in the early part of the 1950s, led him to search for a new means of expression. He found his signature style by embracing non-traditional materials while always demonstrating rigor and concern for formal composition.

Among the earliest Combines in the exhibition will be Collection (1954, San Francisco Museum of Art), a large, predominantly red work in which the artist transgressed the traditional boundaries of a painting by placing elements outside of the pictorial rectangle. Also from that year, Pink Door (1954, Staatliche Museen zu Berlin, Nationalgalerie, Stiftung Sammlung Marx), a delicate yet vibrant work rarely shown in the United States, will help introduce the audience to Rauschenberg's unique approach to painting and sculpture.

One of the more restrained and elegant Combines is Levee (1955, Private Collection). To the right of a rectangle of woven fabric with a landscape image, the artist has fixed a reproduction of an early 16th-century drawing of Princess Elizabeth of Saxony by Lucas Cranach. The princess's high, rounded forehead echoes the geometry of concentric circles in the printed clock-like diagram to her left. Both princess and diagram evoke two of Rauschenberg's favorite subjects, past time and the passing of time.

The equally understated Untitled (ca. 1955, Stefan T. Edlis Collection, Chicago) pushes gently into the viewer's space, as strings from a small parachute dangle a foot below the canvas perimeter. A man's sock fixed to the canvas suggests the movement of a falling body and brings to mind the mythical character Icarus.

Other exhibition highlights include Factum I (1957, The Museum of Contemporary Art, Los Angeles) and Factum II (1957, The Museum of Modern Art). This pair of paintings reflects the artist's wry attempt to make two nearly identical pictures, in order to test the boundaries of painting and to call into question the spontaneity said to characterize Abstract Expressionism. Although comprised of identical collage elements and similar strokes of paint, the two Factums are nonetheless subtly distinct from one another and announce the deliberate choices involved in the artist's creative process.

A number of Rauschenberg's most celebrated Combines will be shown only at the Metropolitan. Among these are Bed(1955, The Museum of Modern Art), Summerstorm (1959, Michael and Judy Ovitz Collection, Los Angeles), and Wager (1957-59, Kunstsammlung Nordrhein-Westfalen, Dusseldorf). A remarkable example of Rauschenberg's hybridization of painting and sculpture, Bed represents one of the artist's most significant contributions to the history of modern art. With a swift gesture, Rauschenberg transformed a traditionally horizontal object into a vertical one and, in doing so, he obstructed the Renaissance notion of a painting offering a window onto another, ideal world. Instead, Bed confounds the viewer's expectations by confronting the audience as an object in our world.

Rauschenberg's singular creative approach is manifest magnificently in Summerstorm. In this three-panel Combine, the artist layers the surface with an array of materials, including printed reproductions, oil paint, and a zipper. On an even larger scale, Wager is a five-panel work that incorporates collage elements such as paper, fabric, and photographic reproductions, in addition to a full-body tracing of a male figure on the far right panel. Wager exemplifies Rauschenberg's ability to work in grand formats, while nonetheless retaining a human scale and thereby enabling the viewer to engage directly with the work.

Bold canonical works will also be on view, such as Monogram (1955-59, Moderna Museet, Stockholm), which displays a paint-daubed angora goat, girded by an automobile tire and mounted on a kind of pasture seeded with urban debris. In Canyon (1959, Sonnabend Collection), an American bald eagle perches on a cardboard box nest, "feathered" by a pillow hanging below. The bird appears to fly out of the canvas into the space of the viewer.

In contrast to the subtle paintings of the mid-1950s that show the artist's frequent drift from syncopated grid compositions to nearly monochrome canvases, there will be a selection of "letter" Combines. Works such as Talisman (1958, Des Moines Art Center) and Magician (1959, Sonnabend Collection) incorporate truncated words made from collage printed letters. These Combines and other "letter" works are not intended to be read, per se, but rather exist as both image and text.

The exhibition concludes with Gold Standard (1964, Private Collection), a freestanding Combine that the artist originally created for the performance "Twenty Questions to Bob Rauschenberg" in Tokyo in 1964. Comprised of a large gold folding Japanese screen, Gold Standard incorporates materials found in earlier works, for example shoes, clocks, and road signs.

Paul Schimmel, Chief Curator at The Museum of Contemporary Art, organized the exhibition. Nan Rosenthal, Senior Consultant in the Department of Nineteenth-Century, Modern, and Contemporary Art, organized and installed the exhibition at the Metropolitan. Installation design in New York is by Dan Kershaw; graphic design is by Barbara Weiss; and lighting design is by Clint Ross Coller and Rich Lichte, all of the Metropolitan Museum's Design Department.

An exhibition catalogue, co-published by The Museum of Contemporary Art, Los Angeles, and Steidl Verlag, will be available in hardcover ($75) and paperback ($45) editions. This comprehensive, fully illustrated publication is edited by Paul Schimmel and Lisa Mark of The Museum of Contemporary Art, and will include contributions by Thomas Crow, Branden W. Joseph, Paul Schimmel, and Charles Stuckey.

A variety of education programs for adults, families, and students will be presented in conjunction with the exhibition, including two Sundays at the Met, lectures, a film series, gallery talks, a program for high-school students entitled "Pictures Made Out of the Real World," and programs for young children. All of these programs will place Rauschenberg's Combines within the broader context of modern American art. Offsite programs in schools, community centers, libraries, and other venues throughout the New York metropolitan area are also planned.

And on Sunday, March 12, 2006, Branden W. Joseph, Associate Professor, Art History, University of California, Irvine, and author of the recent book Random Order: Robert Rauschenberg and the Neo-Avant-Garde, will present the lecture "Robert Rauschenberg: The Gap and the Frame" in the Grace Rainey Rogers Auditorium. A screening of the film Robert Rauschenberg: Retrospective will follow the lecture. This 1979 documentary, directed by Michael Blackwood, traces Rauschenberg's development from his student years and his earliest experiments to a 1977 retrospective at the Museum of Modern Art in New York.