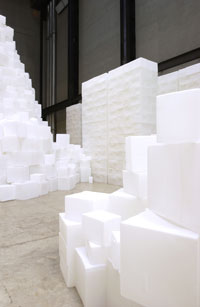 The latest in the celebrated Unilever Series of commissions for the Turbine Hall has been undertaken by Rachel Whiteread.

As one of Britain's leading contemporary sculptors, Whiteread has undertaken several public commissions.

She was awarded the Turner Prize in 1993 for House and, more recently, has completed the Holocaust memorial in Vienna and Monument which was displayed on Trafalgar Square’s empty plinth.

For the Turbine Hall, she has created a gigantic labyrinth-like structure, entitled Embankment, made from 14,000 casts of the inside of different boxes, stacked to occupy this monumental space. The form of a cardboard box has been chosen because of its associations with the storage of intimate personal items and to invoke the sense of mystery surrounding ideas of what a sealed box might contain.