The various components of the installation paint a multi-layered portrait of the artists Pablo Picasso and Hanne Darboven, which interrogates the fundamental issue of repetition and citation in art. The artist examines both the concept of signature style, which is fundamentally about self-referentiality and the consistent reiteration of the same or similar motifs and approaches, and the practice of directly engaging aspects of the work of another artist. 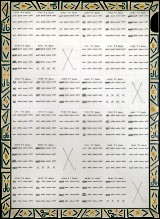 German artist Hanne Darboven (b. 1941) began her art studies in 1952 at age eleven, and in 1962, she enrolled at the Hochschule fur bildende Kunste, Hamburg. By 1966 Darboven had left both the Hochschule and Germany behind to move to New York. Employing the neutral language of numbers and using pen, pencil, the typewriter, and graph paper as materials, she began to make simple linear constructions of numbers that she called Konstruktionen. In these early pieces, the graph paper’s grid structure seems almost to shape the work, as can be seen in the artist’s frequent use of square forms and 4 x 4 groupings of numbers, both handwritten and typed. It was these Konstruktionen that garnered the attention of the American artist Sol LeWitt, who befriended Darboven and became an early champion of her work, which had certain affinities with his conceptual art.

Over time, Darboven came to use numbers in a new way. The realization that the digits designating dates on the Gregorian calendar could serve as a neutral, “graphic equivalent for the basically nonvisual phenomenon of time" allowed her to engage in the satisfying act of writing without describing. Thus by the late 1960s, the chronicle of time, manifest in Darboven’s daily commitment to writing the date in various forms (numerals, words) and based on an ever-evolving system of her own making, became the defining aspect of her art praxis. She also incorporated into many of her works the German word “Heute," meaning “today," which she crossed out to depict the transformation of the present into the past.

In 1973, Darboven started including texts by various authors, among them Heinrich Heine and Jean-Paul Sartre, in her work. By 1978, she was also incorporating visual documents such as photographic images and assorted objects that she found, purchased, or received as gifts. These additional elements allowed her to explore specific and varied aspects of time and history—including an abstract version of biography—even as she remained faithful to her formal and conceptual approach. In the late 1970s, Darboven, who had studied to be a pianist earlier in life, began to devise a system of musical notation based on the calendar and her personal number systems, and, with the aid of a collaborator, adapted her scores into performable compositions. Music, an inherently temporal medium, provided Darboven with a new means of enhancing the visual artwork that forms the core of her oeuvre. Thus, by the end of the 1970s, she had begun to develop all of the elements that came to characterize the “Hanne Darboven" style.

In the 1990s, Darboven found herself over half a century into her life and more than thirty years into her career. During this final decade before the turn of the millennium, end-of-the-century rhetoric was prevalent in the cultural conversation. As an artist totally focused on time and deeply committed to the theme of the century, Darboven naturally turned her attention to what that moment meant for her as an individual, and on a more universal level what one could say about art in the twentieth century. She decided to produce a fin-de-sie'cle installation that engaged both her signature mode of marking time through the systematic writing of numbers and an investigation of a common theme of the 1990s, the recognition of archetypal individuals seen to represent the last one hundred years. She knew that only one person could be thought to embody twentieth-century art: Pablo Picasso.

Hanne Darboven’s installation for Deutsche Guggenheim, Hommage a' Picasso, engulfs the viewer in 9,720 of the artist’s characteristic sheets of paper with handwritten numeric writing, which are encased in 270 hand-painted, framed panels and document the last decade of the twentieth century. She combines this record of the century’s end with a framed lithograph of a Picasso’s 1955 painting Seated Figure in Turkish, a series of purchased and commissioned sculptures ranging from a bronze, Roman-style bust of Picasso to birch-twig donkeys made in Poland, and the newly-produced musical work for 120 voices, Opus 60.

Taken together, the various components of the installation paint a multi-layered portrait of the artists Pablo Picasso and Hanne Darboven, which interrogates the fundamental issue of repetition and citation in art. Darboven examines both the concept of signature style, which is fundamentally about self-referentiality and the consistent reiteration of the same or similar motifs and approaches, and the practice of directly engaging aspects of the work of another artist, either in homage or as a means to one’s own artistic ends. Thus, the very notion of originality stands at the core of Hommage a' Picasso.

Music and films during the exhibition

Hanne Darboven’s , Opus 60, Part of the commissioned work Hommage a' Picasso, will be played at regular intervals throughout the day. Hanne Darboven’s films Am Burgberg, Film 1-6, Der Mond ist aufgegangen, and 42/100, Akt 1-4 as well as a biographical film about the artist Hanne Darboven: Mein Geheimnis ist, dass ich keins habe by Walter Smerling can be viewed in the MuseumsShop.