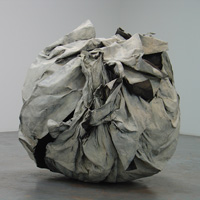 The Joseph Havel exhibition at Laumeier Sculpture Park will be the first of three major exhibitions by the artist to be presented in the United States and England in the next year. The exhibition opens February 10th and continues through May 14, 2006, The Laumeier exhibition will be followed by a ten-year survey at the Museum of Fine Art, Houston, in May 2006. In 2007, a major installation of Havel’s work will be presented at the Baltic, in Gateshead, UK.

The Havel exhibition, titled Drinks are boiling. Iced Drinks are boiling, is a juxtaposition of ideas. One set of sculptures, Havel writes, are “concrete objects that may have been transformed in someway but are doppelgangers of real things." The other set of objects represent “words which were heard or almost more like heard in your head..."

The exhibition features numerous traditional domestic objects, such as bed sheets. These speak to the artist’s exploration of the “transformative state between sleeping and being awake where concrete objects are exchangeable with ideas and both are equally real."

Additionally, the exhibition embraces the domestic theme as recognition of the historic function of the Laumeier galleries which were rooms in an early 20th century residence. “This makes the house not a neutral site but a participant, almost another work, in the unfolding poetic narrative," Havel writes.

Born and raised in Minnesota, Joseph Havel has made Texas his home since 1979. He compliments his own art with a passion for developing other artists. Havel is the director of the Glassell School of Art at the Museum of Fine Arts, Houston and also runs the school’s renowned Core Residency Program for emerging contemporary artists.

Havel traces his art trajectory back to an epiphany at Minneapolis’ Walker Art Center where he saw a trio of sculpture shows by Claes Oldenburg, Alberto Giacometti and Joan Miro'. “If you mixed those three shows together, you’d have the work I’m doing now," Havel said to Texas Monthly’s Michael Ennis in a September 2000 article. Building on his earlier work in ceramics and bronze castings of found objects, Havel’s current projects largely focus on castings of curtains. Purchased at local resale shops, Havel saturates the curtains with wax and shapes and contorts them before creating molds. “When the bronze segments are cast and welded back together, the finished, freestanding sculptures seem to mysteriously levitate, confounding our expectations of mass and gravity while striking an edgy balance between old master elegance and suburban kitsch," writes Ennis.

Havel earned a B.F.A. from the University of Minnesota and a M.F.A. from Pennsylvania State University before moving to Sherman, Texas to begin teaching at Austin College in 1979. He has had solo exhibitions in Lone Star cities like Dallas, Houston, Galveston, San Antonio and Fort Worth as well as Milwaukee, Seattle, Madrid and Paris. He’s also been selected for numerous group exhibitions, most notably the Whitney Biennial of American Art in 2000 and the Basel Art Fair in Paris, France in 2003. He has received numerous awards and grants including an Artist’s Fellowship from the National Endowment for the Arts (1987), an Artist’s Grant from Louis Comfort Tiffany (1995) and the Artist’s Award from the Cultural Arts Council of Houston (1994 and 1999).

Laumeier Sculpture Park
12580 Rott Road St. Louis, MO 63104 USA
Laumeier Sculpture Park is open from 8 a.m. to 1/2 hour past sunset every day except Christmas and New Year's. The indoor galleries and museum shop are open Tuesday-Friday from 10am to 5pm and weekends from noon-5pm. Closed legal holidays.