100 Boots, 1971-73/2005. Celebrating this innovative postcard series, here is a collection of all 51 installments of the artist's epic visual narrative. Full of discerning social commentary, the complete series of the original photographs powerfully evokes the America of the Vietnam era. 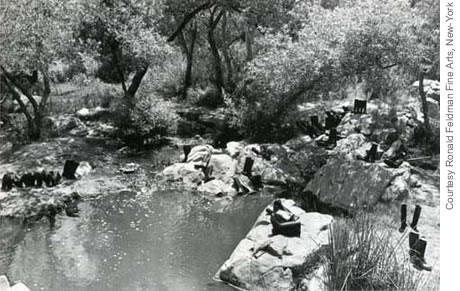 100 Boots, triumphant, marched into New York’s Museum of Modern Art in May 1973, the culmination of a remarkable work that embodied the spirit of a generation and changed the meaning of art. Celebrating this extraordinary and innovative postcard series, here is a collection of all 51 installments of artist Eleanor Antin’s epic visual narrative.

Full of discerning social commentary, 100 Boots powerfully evokes the America of the Vietnam era. The boots begin innocently enough, engaging in everyday suburban activities-going to the market, church, and drive-in-movies. Later, disillusioned, they trespass on private property, symbolically announcing their solidarity with the thousands of Americans participating in the antiwar movement. Unable to avoid the draft, 100 Boots too go to war. By the time these legendary heroes arrive in New York, they have become cultural icons, representatives of the new American experience.

“Somehow it came to me in a dream. There! Black boots! Big black boots. I got them at the Army-Navy Surplus then I printed them up on postcards. Over the course of it — finally two and a half years — fifty-one cards were mailed out to about a thousand people around the world. Now it is a piece that I see as a kind of pictorial novel that was sent through the mail, came unannounced, unasked for. It came in the middle of people’s lives."
Like all good art, Antin’s ongoing letter to America - whether spilling out of mailboxes or collected in book form - continues to provoke a response.

Erna He'cey Gallery is pleased to present the complete series of the original photographs of the 100 Boots postcards, currently on display at the “Los Angeles - Paris" exhibition at the Centre Pompidou. The show at Erna He'cey is part of our parallel exhibitions and events program.

Erna He'cey has represented Eleanor Antin since the opening of the gallery in Brussels, and will be presenting a major solo show of hers in 2007.

Eleanor Antin is internationally renown for her work in photography, video, film, performance, installation, drawing, and writing. She has had one-woman exhibitions at the Museum of Modern Art, the Whitney Museum, the Wadsworth Atheneum, etc. as well as a major 30 year retrospective at the Los Angeles County Museum of Art which published a book ELEANOR ANTIN by Howard Fox. Her retrospective also traveled to the Mildred Lane Kemper Art Museum at Washington University in St. Louis and toured the U.K. She has been in major group exhibitions at the Hirschhorn Museum, the Los Angeles Museum of Contemporary Art, the Kunsthalle Wien, the Sydney Biennale, and the Beaubourg, among others.
She is represented in major collections including the Art Institute of Chicago, the Whitney Museum, the Museum of Modern Art, the Jewish Museum, the San Francisco Museum of Modern Art, etc. As a performance artist she has appeared in venues around the world including the Venice Biennale and the Sydney Opera House. Several of her mixed media, groundbreaking works such as "100 BOOTS", "CARVING; A Traditional Sculpture", "The Angel of Mercy", "Recollections of my Life with Diaghilev", "The King of Solana Beach", "The Adventures of a Nurse," are frequently referred to as classics of feminist postmodernism. She is represented by the Ronald Feldman Gallery in New York.

She has written 4 books, BEING ANTINOVA (Astro Artz), ELEANORA ANTINOVA PLAYS (Sun & Moon), 100 BOOTS (Running Press), "MAN WITHOUT A WORLD" (Green Integer, Sun&Moon Press). She has made 9 videotapes, among them "Representational Painting", 1971, "The Ballerina and the Bum", 1973, "The Little Match Girl Ballet", 1975, "The Nurse and the Hijackers", 1977, and "From the Archives of Modern Art," 1989, (all tapes distributed by Electronic Arts Intermix).

She has written, directed and produced narrative films, among them the feature, "The Man Without a World", 1991, (Berlin Film Festival, U.S.A. Film Fest., Ghent Film Fest., London Jewish, San Francisco Jewish, Women in Film, etc.) and "The Last Night of Rasputin," 1989, (all films distributed by Milestone Film & Video), and video installations including "Loves of a Ballerina", 1986, and "Vilna Nights", 1993.

The first of her new large scale photographic works juxtaposing the world of ancient Rome with our contemporary world, "The Last Days of Pompeii", premiered at the Ronald Feldman Gallery in NY in Feb. 2002, for which she won a Best Show AICA Award (International Assoc. of Art Critics) and "Roman Allegories" opened at the Ronald Feldman gallery in the winter of 2005. Other recent awards include an AICA Best Show award in 1999 for her Los Angeles County Museum of Art retrospective, a Guggenheim Fellowship in 1997, National Foundation for Jewish Culture Media Achievement Award in 1998, and the Woman's Caucus of the College Art Association award for Lifetime Achievement in 2006.
Antin is an Emeritus Professor of Visual Arts at the University of California at San Diego.