Syabhit Shkreli starting from wild urbanization will realize a series "of industrial insects". Helmut Dick will realize a performance during which one a black box with a sheep head (stuffed) on it "will navigate" on the bed of the Lana river. 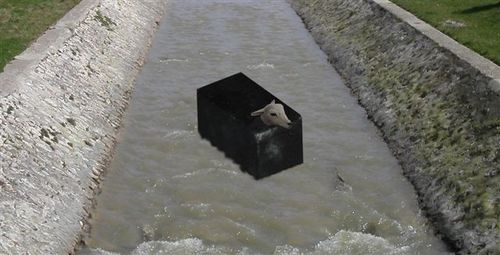 And the art in between

The exhibition, supported by The Embassy of the Netherlands in Albania, Tirana Steel Works S.H.PK Albania and Orgacom, is developed around the idea of collaboration between a Dutch artist, Helmut Dick and an Albanian artist, Syabhit Shkreli. The two artists have visited the spaces of the “Uzina e traktoreve" of Tirana trying to interact with those atmospheres and the relations between "factory" and city. Starting from these points it is born the exhibition, “and the art in between", the whose works reflects on the idea of creation, life, death and fear. Helmut Dick, will realize a performance during which one a black box with a sheep head (stuffed) on it "will navigate" on the bed of the Lana river, like a lifeboat escaped to a plane crash, carrying with it the recording of a barkling dog. Syabhit Shkreli starting from the fear that comes from the degradation and the wild urbanization will realize a series "of industrial insects" that exiting from the river, will metaphorically visualizes the image of the Lana like ring of conjunction of the two sides of the city and of the soils that take with itself, "masked" from superficial desire of aesthetization of the city landscape. The black box and the bugs are industrial products derive from the wishes to create a new society, but they represent also in a sense the failure which this society risks to go towards visualized also through the irony presents in the artists works.