Like Looking for Snow Leopard. Yutaka Sone’s marked predilection for the impossible and the paradoxical is expressed in a very diverse body of work that has its roots in performance but emphasizes the sculptural. Not only can it not be reduced to a single medium - his work encompasses sculpture, drawings, performance, and video. 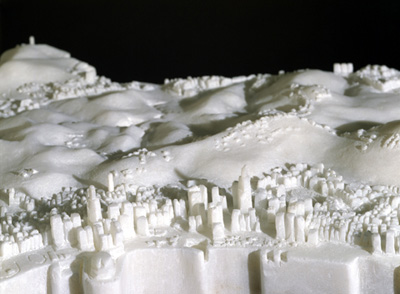 Yutaka Sone’s marked predilection for the impossible and the paradoxical is expressed in a very diverse body of work that has its roots in performance but emphasizes the sculptural. Landscape and amusement inform an experience-oriented oeuvre that is cause for reconsidering our relationship with nature. His work defies easy categorization. Not only can it not be reduced to a single medium - Sone's work encompasses sculpture, drawings, performance, and video - it is also difficult to locate culturally. Although Sone has spent a lot of time in Japan, primarily Tokyo, his work does not exploit this heritage. Nor does it aim to emulate strategies of western art. Rather it strives to create its own poetic vocabulary not connected to a particular culture, but to culture at large.

Yutaka Sone, who now lives and works mainly in Los Angeles, has travelled extensively. His experience both of the places he has seen and the people he has met, and his aim to unearth common ground between extremely diverse groups lies at the base of much of his projects. With Looking For Snow Leopard at the Kunsthalle Bern, Sone continues a physical and metaphorical journey towards an “unreachable place", creating works based on a personal assessment of landscape. For this exhibition, he prepares a new version of his very large multimedia landscape-piece entitled Snow Leopard Island: an in-progress tabletop model that combines features of every topography and climate.

The installation comes along with a series of works made over the last couple of years. Cities and sceneries carved into single, large blocks of marble conveying a timeless stillness, purified and almost abstracted by the stark beauty of the white material. Sone's love of snow and skiing, has brought him to his latest works, a series of snowflakes carved out of single pieces of natural crystal or marble. He microscopically examined a great number of snowflakes and discovered that no two flakes in the world are ever the same. He then started designing his own snowflakes, which, being different from all other snowflakes in the world, are not based on real models but could in principle be real models for future flakes. Most of Sone's work is produced in his studio in China, where he works together with a team of craftsmen in a family-run a stone factory.

Yutaka Sone (Born in Tokyo, 1965) exhibited widely internationally. He participated in the Whitney Biennial, the Sydney Biennale, and the Yokohama Triennial. He was part of the Cities on the Move exhibition (shown in the Louisiana Museum, Humblebaek; the Hayward Gallery, London; the Vienna Secession; and P.S. 1 Contemporary Art Center, NY) and participated in Idyl - as to Answer that Picture, at the Middelheim Open Air Museum in Antwerp, Belgium. The exhibition at the Kunsthalle Bern will be most extensive presentation of Sone’s work in Europe thus far and takes part in a series of three highly different exhibitions the artist developed over the last six months. Together with the two other institutions involved, i.e. the Renaissance Society at the University of Chicago and the Aspen Art Museum, the Kunsthalle Bern will publish a book on Sone’s work with texts by Philippe Pirotte, Hamza Walker, Benjamin Weissmann and Heidi Zuckermann-Jacobson