Artworks that Evans has realised as part of the project will be exhibited at the Stedelijk Museum Bureau Amsterdam. These include an illusionistic wall painting of flyposted publicity material advertising the retreat, a sculpture to be placed in the retreat and a short video work. The film narrates an ‘existentialist’ encounter with the painting of Jan Six I by Rembrandt. In a somewhat oblique way the film connects the different strands of the whole project. 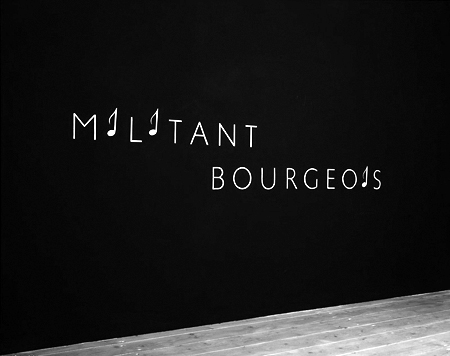 On June 2 the exhibition Militant Bourgeois: An Existentialist Retreat by the British artist Chris Evans opens at the Stedelijk Museum Bureau Amsterdam. This exhibition is a prelude for a project that Evans will realize this Autumn in a public area of Amsterdam: a retreat where anyone who calls him or herself artist can stay for a while.

Militant Bourgeois: An Existentialist Retreat sets out to explore some of the issues around contemporary forms of patronage and the extent to which they differ from historical forms. The project will question what is at stake for the supported artist and sponsored artwork and whether the philosophical project of existentialism, with its doctrine of self-determination and quest for meaning, has anything to offer the artist cushioned by state subsidy and public sector funding.

Starting from the Renaissance, when the fields of art and science were supported by the patronage of both the royal and holy courts, to the present day where forms of state and public sector sponsorship are dominant, artists - or those who are lucky enough to be supported - cling to the ‘umbilical cord of gold’ (Greenberg, Avant-Garde and Kitsch). Militant Bourgeois asks, what is the precise nature of this relationship and what happens if the cord is broken? And, once this ‘freedom’ is won and the artist tumbles into an abyss of uncertainty and angst, what tools might he or she engage in order to climb back out?

The project centers on the foundation and construction of an ‘existentialist’ retreat for Dutch artists. The retreat will be situated in a small building near Amsterdam’s orbital motorway. It will be sparsely furnished with a table, chair and wood-burning stove.

Recalling the neo-existentialism of JG Ballard’s Concrete Island and its protagonist’s involuntary exile from the modern world, the retreat simultaneously offers exclusion from, and a ringside seat on, the logic of late capitalism. The chimney of the stove will mutate into a sculpture of eleven ladders, all of which will protrude from the roof of the building. The sculpture, has been created in collaboration with Jan Six, a descendent of Jan Six I, a 17th Century Burgomaster and Patrician.

A meeting with Baron Jan Six, Lord of Hillegom and director of the Six Collection - to give him his full title - inspired Evans with the idea for the sculpture. Evans introduced the premise of the project and asked him to think about an image which could be situated within the retreat and would accentuate the ‘existentialist’ experience.

Because this is a difficult concept, Evans asked Six to imagine a situation where it would it be impossible to conceive of a universal moral, right or wrong decision. Six eventually settled on the image of eleven ladders, which he saw as a literal extension of the horizontal buttonholes of the jacket that Jan Six I, his ancestor, is wearing in a portrait of him painted by Rembrandt in 1654. For Six these ladders would symbolize (or represent) the ‘ladder of life’, the number of Six generations and, for the purpose of the sculpture situated in the existentialist retreat, the absence of any ‘moral/ethical high ground’ and the presence of endles s choice.

The Netherlands has suffered recently from international criticism of a lack of artistic intensity despite, or perhaps because of, abundant funding for the arts and a generous subsidy system for individual artists. The project will test this thesis by inviting Dutch artists to stay at the retreat. No funding or support will be offered to the artists, other than a place to live and work, and a chance to re-visit Soren Kierkegaard’s proposal that the highest good for the individual is to find his or her own unique vocation. As he wrote in his journal, “I must find a truth that is true for me… the idea for which I can live or die’. .

Artworks that Evans has realized as part of the project will be exhibited at the Stedelijk Museum Bureau Amsterdam. These include an illusionistic wall painting of flyposted publicity material advertising the retreat, a sculpture to be placed in the retreat and a short video work. The film narrates an ‘existentialist’ encounter with the painting of Jan Six I by Rembrandt. In a somewhat oblique way the film connects the different strands of the whole project.

Chris Evans (1967) lives and works in London and Berlin. In 2004, he was the Scottish Arts Council’s ‘artist in residence’ in Amsterdam and, since then, has exhibited widely including solo exhibitions at Gallery Juliette Jongma in Amsterdam, STORE Gallery, London, Tramway, Glasgow and the Henry Moore Institute, Leeds.

His work has also been exhibited internationally in many group exhibitions including Lisson Gallery, London in 2005 and KUMU, Tallinn in 2006. Evans’ work is also included in the current exhibition British Art Show 6 - which gives an overview of recent developments in British art. For the British Art Show 6, Evans is showing Radical Loyalty, an ongoing project to build a sculpture park that started in 2003 with the purchase of a plot of unpromising land in Estonia. In 2006 Evans will be producing a solo exhibition with Studio Voltaire, London; Chapter, Cardiff and IPS, Birmingham. He will also exhibit at MOCA Belgrade, East International UK and Gasworks, London

The exhibition in the Stedelijk Museum Bureau Amsterdam is open from June 3 till July 9. The retreat, located near the South Ring Road, is scheduled to be open from mid September until mid November. Artists can sign up for a stay in the retreat from June 3. From September onwards additional publicity concerning the retreat will be sent out.
The exhibition is accompanied by SMBA newsletter nr. 92 with an essay by Alex Farquharson who is curator and publicist in London.

‘Militant Bourgeois: An Existentialist Retreat’ is made possible thanks to support of the Amsterdam Fund for the Arts.