Mario Rizzi has chosen this title for his personal exhibition at the Gallery Nouvelles Images of The Hague in an ironic sense. There is nothing unimportant or not serious in the two subjects the artist deals with, although all the work is about children. 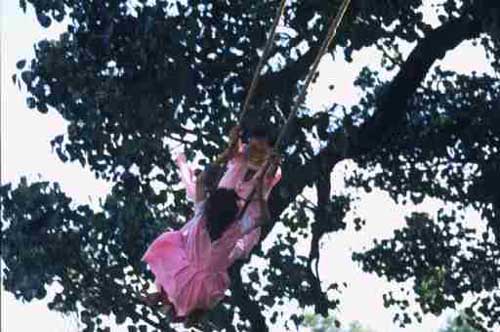 The word â€˜Kinderachtigheidâ€™ indicates in Dutch something childish.
Childish is an ambiguous adjective, as it means young, pure, innocent like a child, but at the same time naÃ¯ve, immature, not serious or important.

Mario Rizzi has chosen this title for his personal exhibition at the Gallery Nouvelles Images of The Hague in an ironic sense. There is nothing unimportant or not serious in the two subjects the artist deals with, although all the work is about children.

â€˜Are there stars in your country?â€™
It is a multimedial installation.
For one month, during October 2000, like the wandering photographers of the beginning of the 20th Century, Rizzi traveled in Nepal from village to village, portraying all the girls aged 7 to 16. Photographing the â€˜not lostâ€™ girls to remind the horrible trafficking of children for sexual abuse. Seven to 16 is the age of the girls who are sold, 7000 per year, often from their same families, to Indian brothel owners. Only natives know the way to some of these villages. Here people are starving, there is no electricity and no water in the houses. In Bombay 60% of the 10000 prostitutes are Nepali: to oblige them to be sexually exploited, sometimes more than 20 times a day, they are tortured, beaten, inflicted by cigarette burns, alcohol intoxicated, isolated, mass raped, heavily maimed. There are twenty portraits in the exhibition. In the center of the gallery â€™Absenceâ€™ is the installation of a swing.

Mario Rizzi lived a few days with some of the returned girls from Indian brothels in the â€˜AIDS hospiceâ€™ of a humanitarian organization. One day they danced for him a Nepalese dance, singing a song whose title would sound in English â€˜Little girls donâ€™t go to Bombayâ€™. He filmed them, with the lens cap fixed on the objective, for a work called â€˜Sixteen Rosesâ€™ (named after a Nepali prostitute in the movie â€˜Salaam Bombay').

â€˜Sixteen Rosesâ€™ and the video work â€˜Against silenceâ€™ are also part of â€˜Kinderachtigheidâ€™. As well as â€˜Ujeliâ€™, a Nepali fiction film, produced by Unicef Nepal, about the life of a Nepali girl.
A web installation in Flash is the web component of the project. At http://www.mariorizzi.it it is possible to see a lighter version of it.

â€˜Chickens can flyâ€™
It is a video installation.
The Lloyd Hotel is a building full of historic and individual memories. It was a hostel for immigrants waiting to embark to America, a Nazi prison, a prison for the collaborationists, but its name is particularly linked to its long period as the Amsterdam juvenile prison, until 1989. Last year Rizzi, filming this ex-dungeon for young adolescents before it was finally dismantled, discovered that nobody could steal chickensâ€™ right to fly.