The work of Daniela Kustova is a video-documentary about Rom (gipsy), American and Bulgarian immigrants, and various travelers whose experiences can be described as kind of non-permanence. Alessandro Nassiri Tabibzadeh: DR 4548 B. The plate of a Volkswagen Golf of 1978, that after 20 year of service in the European Union, was taken to Albania. The video will show it's odyssey of return till the end of its productive life, the demolishment. 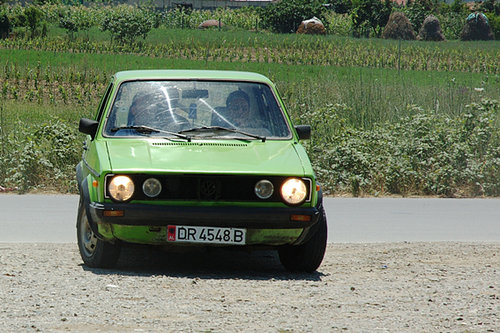 1.60insurgent space is the name of a space that move itself continuously inside the cities, producing exhibitions whose intent is to put to comparison international artists with various places, different from the “institutional ones", in order to create new arguments around the art and its borders. The exhibitions are curated every month by Stefano Romano and a different curator for each event.

For this appointment, Stefano Romano has invited Katia Anguelova who will present the new art work video-documentary of Daniela Kustova Body- Without-Organs. Bulgarian Bar.
The Bulgarian artist who presently lives in New York and the Bulgarian curator who presently lives in Milan will meet in Tirana to “create" a ground where they can ask questions and reflections about immigration, music and journey will be like links to integration.
Through the exhibition moment they want to create a situation of cultural dialog and confrontation between geographic places, different from each other but close to each other.
The work of Daniela Kustova is a video-documentary about Roma (Gypsy), American and Bulgarian immigrants, and various travelers whose experiences can be described as kind of non-permanence.
Inspired from ethno-mesh and gypsy punk music presented in the New York music scene, the video discovers the Bulgarian Bar through the eyes of recent immigrants in New York who already have left their own reality behind.
The Bulgarian Bar is not a “cultural center", like ironically written on the entrance sign, but rather a cultural imaginary area of converse convergence: on one side the institutional representation of identity ide'e of Cultural National Center and on the other side the essence of nomad feeling expressed through the gypsy-punk music.
Dancing (in Bulgarian Bar) implies an overcoming of a normal body operation; which is overtaken from the new possible meanings of organic fusion with the music. As D.J. Joro-Boro says “the party depends on people and the possibility they forget their identity".
Furthermore it’s going to present the installation “Fixing Reality" that utilizes the blue screen as a slide to start actions and present co-existing realities. The blue screen as a slide is a connection between the two works of Daniela Kustova, but if in the new work Body-Without-Organs the culture is multiple and hybrid, in Fixing Reality the identity is closely connected to cultural and geographic appearance.

DR 4548 B
or an odyssey of XXI century
The new model it’s better than the old one.
This slogan moves our society, based on the consumption economy; change an old object with a new one.
We dream, purchase and use the new one. What about the old one?
Where does go our old car, old mobile, old computer, after we replace it for the recent model, more beautiful, more technological?

The first time I was in Tirana I took the public bus that still had the logo ATM (Milan transport agency).
I asked my self, if I ever was on that bus before in Milan, the city where I lived some time ago.

A lot of products have a first life in industrial countries and a second one in other more challenged financially. Often a bus that it’s “useless" in a country, has ten or even more years of work in another one. The continuity of the using this products has its pro and cons. From one side guarantees a low cost service and the reuse of something fated to be demolished, for the other side this objects pollutes countries where the ecological norms don’t exist.
DR 4548 B it’s the plate of a Volkswagen Golf of 1978, that after 20 year of service in the European Union, was taken to Albania. Now, after almost 30 year after of its fabrication we bring it back to demolish it.
The video will show it’s odyssey of return till the end of its productive life, the demolishment.

July 7th 2006, in Tirana, in front of the pyramid, in memoriam monument of Enver Hoxha, president of Albania from 1945 till 1985, we will celebrate the beginning of the return trip of Volkswagen Golf plated DR 4548 B.
Alessandro Nassiri

This project is realized in collaboration with “Placentia arte gallery"