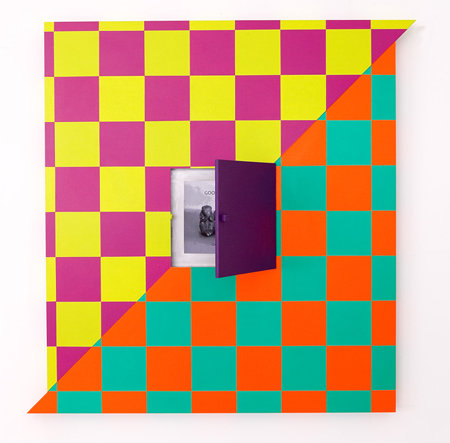 New York, NY - Paul Sharpe Contemporary Art (PSCA) announces the opening of “Good & Evil", nine new acrylic on wood paintings by New York artist Gloria Garfinkel. Each of the paintings includes a door which conceals an artist’s book of digital photographs inspired by her travels in Bali. The exhibition is complemented by a scholarly essay by critic and artist Joe Fyfe.

“Good & Evil" alludes to the Hindu - Buddhist belief system where good exists simultaneously with evil within all persons. One is both not just capable of good or evil, but is both good and evil. It is up to the person to focus on the good and to mitigate against evil impulses.

This juxtaposition of diametrically opposed sentiments is captured in the artist’s works in a striking way: she had specially designed wood surfaces built that would normally be a 32 inch square; this she bisected diagonally and shifted by approximately one inch. In the center of each support is a door which conceals a compartment that houses an artist’s book with an essay and digital imagery that sets a social “good" image against a social “evil" image in 10 pairings. The front of the paintings are in vibrant Balinese colors in a geometric pattern reminiscent of the cloth that is draped around sculptures of deities in Bali.

Garfinkel, who is represented by PSCA, has had a number of solo shows this year at other venues, including the Brattleboro Museum and Art Center (the “Secrets" paintings), Brattleboro VT; The Lab Gallery (the “Obi" series), New York NY; and The Durst Organization, New York NY, and at Yellow Bird Gallery, Newburgh, NY. The later show, which comprises four bodies of related works exploring her “Outdoor Paintings" will be reviewed in the November issue of ARTnews magazine.

PSCA is founded on the premise that the artist comes first and is the raison d’etre of the art world. The role of the gallerist is to nurture creative accomplishment and to cultivate the collectors and curators who can sustain the artists. The artists represented are those whose work one would wish to collect and to enjoy, while helping to support their careers. PSCA is led by Paul Sharpe and had its first public exhibition in January 2001.