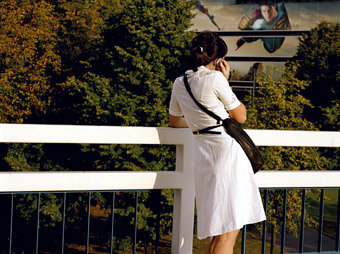 Hannah Starkey constructs complex, yet seemingly fleeting images that primarily portray women's encounters with other women and their environment. Seeking to explore "everyday experiences and observations of inner city life from a female perspective". Her images often portray moments of quiet drama, touching upon areas of experience which are familiar but which remain unspoken or below the surface. Suggesting narratives based on chance experiences and personal impressions within the shifting structures of contemporary society Starkey captures her subjects in the private moments that often occur in the most public places, from lobbies and restaurants to libraries and hospitals.

The images are the result of precisely chosen locations and staged rendezvous within our shared urban environment, and respond to everyday human experience. Importantly, Starkey uses not “actors", but people she encounters at the locations she is exploring. Seeing this approach as inherent to the engagement with the environment, and further emphasising the mutual psychological shift between the subject and their surroundings.

Also, predominant in this latest body of work (through 2005 - 2006) is the attention given to the relationship between physical and represented space. Aware of the psychological effects our surroundings can impose, Starkey further explores these notions to sometimes eerie effect. The absence of a horizon line or vanishing point, reflective surfaces and the presentation of a three dimensional space represented in two dimensions within the artists frame all serve to reinforce the abstract and psychological drama.

From What We Are Made

Tanya Bonakdar Gallery is very pleased to present Ernesto Neto’s fifth solo exhibition at the gallery, From What We Are Made. Continuing his exploration of sculpture’s narrative capacity, Ernesto Neto’s most recent work addresses culture and experience from the cellular level to the mythic, from the micro to the macrocosmic. Using a formal vocabulary that draws from the natural world, Neto collapses the distinction between architecture and biology, making the viewer aware that the natural world should not be thought of in contrast to human creation and social interaction. The exhibition also explores our perception of color and space, as nothing remains fixed or static in Neto’s work, but rather, everything reacts; to the laws of physics, to the properties of other elements; or to the actions of the visitor.

From What We Are Made represents Neto’s most intense exploration of color since the artist’s early spice works. On the main entry wall, Neto presents “Colors, Cultures, Knots, and Time" a new large-scale work from the “Dry Color Series." Colored lengths of cotton fabric are pulled tightly from a central ring to a circular perimeter, like the spokes of a wheel. A coagulation of cellular colonies are formed from tight painterly lines, creating works that are at once painting, sculpture, tapestry and elastic wall-relief.

In the main gallery space, Neto presents, “From What We are Made, Made, Of Of" a large organic architectural installation that glows with light and color, turning its encapsulated space into a tactile world in which form, material, and scale are investigated. An interior curve reveals a fetal floor plan, as a thick foam floor serves as a platform for numerous small soft sculptures that can be read as amoeba-like forms or characters from an ancient alphabet. Neto uses these symbols to suggest the parallel emergence of living organisms and organized culture. These smaller elements pop with color, red, pink, green, and yellow, echoing and complimenting the more subdued but still luminous color of the ceiling. As the visitor enters and activates the space, the floor elements are rearranged and moved, presenting an ever-changing composition of color, or writing and re-writing a story that never ends.

This installation follows a dynamic series of works by Neto that serve as both sculpture and built environment and illustrate the artist’s uncanny facility for structural engineering and architectural design. Using simple material such as Lycra and Styrofoam, cotton, ground spice, sand or rice, to transcend their more banal purpose, Neto makes reference to his Neo-concrete and Arte Povera forebears, turning these materials into complex spatial configurations that challenge notions of stasis, equilibrium, gravity and tension.