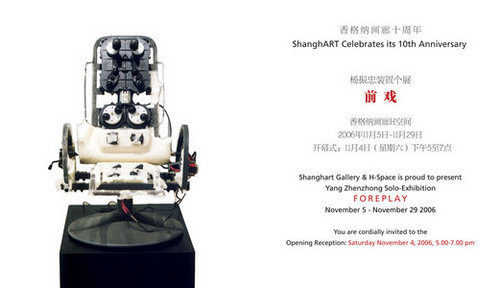 ShanghART Gallery & H-Space is proud to present a solo-exhibition with works by Yang Zhenzhong (b. 1968).

Yang Zhenzhong involves his audience in explorations intended to generate visual effects and stimulate feelings and thoughts to bring about unforeseen experiences and multiple points of view. Foreplay provides an ample chance to view a practice that resists any specific style, medium or material.

The desire to challenge normative notions and fixed formats of social behavior informs the practices of Yang Zhenzhong's work. He is pre-occupied with a tendency to invert the order of things and often touches upon taboos such as death and out-dated social norms. His approach is metaphorical rather than narrative: His videos often start from witty ideas, employing pictorial repetition and rhythmic coordination of sound, language and image. Yang Zhenzhong became famous in 2000 with his half-hour video (I Know) I Will Die that features short sequences in which a series of people speak the phrase "I will die" to the camera. It is a disconcerting, soberly presented film that confronts the viewer with existential questions. Yang Zhenzhong recognizes that individual participation is the starting point for the transformation of perception. Another landmark video includes Lets Puff which premiered at the fourth Shanghai Biennale (2002) and the 50th Venice Biennale (2003). The video starts from the interplay of two images: a young woman puffing and exhaling in a busy street. Every time the woman breathes, the image of the street moves away from the viewer. The rhythm of the traffic and the angle of perception are altered with the rhythm of the woman's breath. Consequently, the image is not fixed, but remains in a state of change. Yang Zhenzhong's playful videos are more than visual reflections; they are intelligent comments on the design of contemporary society.

With a sincere attitude, but in a playful manner, the artist explores the contemporary preoccupation with questions of identity and perception, and the ability of images to turn apathy into anticipation, and ordinariness into desirability. He uses part fiction and part reality that tangles both the euphoric enthusiasm and deep anxiety of day-to-day experience. His work has lately been described as an extraordinary distillation of an artistic practice that couldnt be more preoccupied with the nature of what is real.