Christian Marclay in "Crossfire" presents a new video installation and group of collages. Since the early 1980s, he has been developing a distinctive body of work that explores the relationships between sound and image. "Angle" by Koen van den Broek is a new group of minimal paintings with pared down, panoramic compositions that have moved away from the original source. 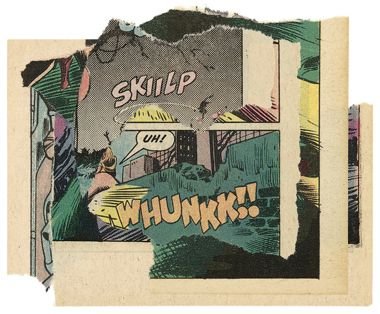 White Cube Hoxton Square is pleased to present a new video installation and group of collages by Christian Marclay. Since the early 1980s, Marclay has been developing a distinctive body of work that explores the relationships between sound and image. Renowned for his exuberant and witty collages, Marclay has made use of everything from record covers to film clips to construct pictures, objects and installations.

The video installation Crossfire creates a charged, physical space in which the viewer is surrounded by four large projections playing a rapid montage of guns and gunfire. The gun is perhaps the most iconic image in the media, a constant presence in everything from newscasts about faraway wars and local crimes to its persistent role as a narrative device in movies. While guns always foreshadow violence, they also offer a false promise of safety from an outside threat. Marclay plays with this twin sense of dread and fascination. Crossfire features characters handling a variety of guns, from small pistols to unruly rifles - a man pulls back his jacket to reveal a thick handgun in a holster, fingers caress a steely gun barrel as if stroking a fetish object, a thumb pushes bullets into the cylinder of a revolver. When the shooting begins, the viewer is engulfed by a cadenced, pulsating violence that diminishes and intensifies with mesmerising rhythm. Although the viewer is under a continuous assault, Marclay's precise arrangement of sound and image allows the gunfire to become a kind of percussion instrument, and Crossfire coaxes a strange music from the westerns, gangster flicks and war movies that the artist has used as raw material.

For the second part of the exhibition, Marclay has created a group of prints made from onomatopoeic words that he has torn from comic books and collaged before scanning and reprinting them at a large scale. Onomatopoeic words, with their huge letters and strings of unbroken vowels, blaze across the page at decisive moments in every superhero's escapade, yet their forceful presence remains silent until interpreted and read aloud. Marclay treats these chunky words like objects, creating collages that emphasise the materiality of the paper and the ink of the original comic book. Removed from their narrative context, the words fizz with random violence and barely contained energy.

Christian Marclay has exhibited widely in both solo and group exhibitions. A mid-career retrospective began at the Hammer Museum, Los Angeles in 2003 and concluded at the Barbican Art Gallery, London in May 2005. "Christian Marclay: Replay" will be at the Cite' de la Musique, Paris, from 9 March - 24 June 2007.

White Cube is pleased to present a new group of paintings by Belgian artist Koen van den Broek. In these works, van den Broek has made a series of minimal paintings with pared down, panoramic compositions that have moved away from the original source of their image - the photographic snapshot - to focus instead on the application of paint, the spatial effect of colour and the reduction of a motif to its barest possible form.

In these pictures, which present abstracted compositions taken from urban landscapes, linear structures are delicately marked out in primary, unnatural colours against great expanses of white ground, which seem to dominate the picture surface. The hard edges of these vertical and curving structures appear to dissolve and break up as if the reality of the image is being tested, creating a feeling of disconnection. The compositions are dynamic and yet the objects they depict are ordinary. Dirk Lauwaert has described this element of van den Broek's paintings a 'bottomless anonymity' and sees his pictures as creating a 'sense of loss in nonetheless attentively observed details'. In this way, van den Broek seems to 'de-frame' his original photographic subject emphasising the canvas as a container that presents a cropped and arranged view of a much more expansive subject.

Some of these new paintings are divided vertically in half by a white line, creating a doubling effect that gives the impression of images seen in succession on the pages of a book or in the strip of a film but also about how images are never seen in isolation but always relate to what the viewer has seen before or after. In these works, the motif is altered and only approximately repeated. In Rhythm, for example, everything seems the same, but the second image is simply a blurring of the first. In Display Disconnected there is the approximation of a curb - reduced almost to a sweep of the brush - and on the right hand side, a more careful rendition of it. Contrary to van den Broek's earlier paintings, that created tension out of non-space - making shadows solid, for example - everything here seems less fixed and more vaporous. In Cut Out, for example, the border dramatically moves from bottom to top in an unequivocal vertical, creating a dramatic composition. Half pink and half sap-green, the border seems to become more of an approximated building structure with a strip of blue barely marking the bottom right hand corner of the canvas.

Koen van den Broek was born in 1973 in Bree, Belgium, and lives and works in Antwerp, Belgium. Recent solo exhibitions include Museum Dhondt-Dhaenens, Deurle (2005) and Domus Artium, Salamanca (2004). His work has featured in group exhibitions including the Prague Biennale (2005), Kunsthalle Mannheim (2004) and San Francisco Museum of Modern Art (2003).