50 large format works. 18 years of artistic production: the oldest work in the exhibition dates from 1989, the newest from 2007. The artist has also re-interpreted familiar motifs using current digital technology and has enlarged the standard format of his images as well, tailoring them especially to the exhibition situation: 1800 sqare meters. Curated by Thomas Weski. 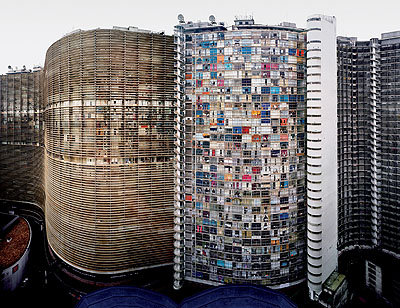 
For the first time in nine years, Andreas Gursky will show his works in a museum context in Germany in a solo exhibition. The Düsseldorf artist will present 50 large format works. The majority of these works was created following his much-acclaimed exhibition in New York's Museum of Modern Art in 2001. The presentation contains works from 18 years of artistic production: the oldest work in the exhibition dates from 1989, the newest from 2007. The largest exhibition of the artist's works to date will be on view in the east wing of the Haus der Kunst, covering an area of 1,800 square meters. Andreas Gursky has also re-interpreted familiar motifs using current digital technology for this exhibition and has enlarged the standard format of his images as well, tailoring them especially to the exhibition situation. The largest images now measure 188 x 508 cm.

Andreas Gursky was born in Leipzig in 1955 and studied at the Folkwangschule in Essen from 1978 to 1981. He then transferred to the Staatliche Kunstakademie Düsseldorf, where he earned his degree as a master-class student with Professor Bernd Becher in 1985. Since the late 1980s Andreas Gursky has presented his works in countless solo and group exhibitions. His works are included in many important national and international collections. In addition, his art regularly achieves top prices at auctions.

From the beginning of his artistic activities Andreas Gursky has addressed contemporary themes, arranged into the categories of work, leisure time, presentation and representation. These categories allow his photographs to be classified into the production of goods and their distribution, modern production plants and international stock exchanges, major entertainment events, such as concerts and sport events, and aspects of mass tourism, as well as the presentation of luxury goods and supermarket products.

Andreas Gursky's motifs make use of the visual codes of a globalized world, whereby the collective memories incorporated in his works are no longer necessarily based on individual experience but can be evoked via the media. The artist's images initially appear familiar and intelligible to us because the situations or venues have already been stored in our memory or subconscious.

The photographs are often taken from a slightly elevated perspective. This vantage point displays the local contexts as entities that are often unusual to the viewer. Sometimes the artist presents his motifs simultaneously from above and at an angle or from above and from below, thereby creating an artificial, privileged perspective, which allows the viewer to float weightlessly above the subject matter, enabling him to view the objects from an idealized perception that he is normally denied. In this way the artist implies an availability and accessibility that does not, in fact, exist in reality. The unusual popularity of Andreas Gursky's works is based in part on this type of accessibility.

People are integrated into the scenes. Illustrated in the scale of miniatures, they do not act as individuals but rather play the part of extras and serve as substitutes for the viewer: strollers under a highway bridge, spectators at the Tour de France, inhabitants of high rises, factory workers, bathers at a beach or members of the Bundestag. The images appear clear and ordered. Through the repetition and variation of individual elements, decorative structures are created that lend the works a graphic appearance when viewed from a distance, while details provide an overabundance of information when seen close up.

Since the early 1990s Andreas Gursky has made use of the technical possibilities of digital processing in the production of his images. The motifs are photographed using both analog and digital methods. Employing the many shots taken this way, the final image is composed using digital technology. Andreas Gursky's works, therefore, are not classical documentary photographs that attempt to portray objects with the greatest possible likeness by making use of the medium, but, rather, are fictions based on facts. "Reality can only be portrayed when one constructs it." Ascertainment and allegation, representation and imagination are united in a single image.

The composition resulting from a large number of images allows for the creation of images that appear to be totally removed from the momentary and yet are illustrations of a specific event. The work, "F1 Boxenstop I," for example, records a dramatically charged moment at a pit stop during a Formula One race, in which centiseconds matter and the actions of the technical team are geared towards an extreme economy of time. The scene simultaneously appears to be detached from the fleeting moment.

"This exhibition is a new territory for me." With their paradoxical character and their idealized composition, Andreas Gursky's works can be regarded as new territory: they express common experiences and are depictions of their time and constructions that do justice to a complex reality; with the apparent ease of a stroll through the world, they combine analytical observations with the pure joy of seeing.

Following its begin at the Haus der Kunst in Munich, the show is scheduled to travel to Istanbul Modern, the Sharjah Art Museum, the House of Photography in Moscow, the National Gallery of Victoria in Melbourne and the Vancouver Art Gallery. Thomas Weski, Chief Curator at Haus der Kunst, will prepare the exhibition and its tour.

The presentation in Munich is funded by the Bayerische Sparkassenstiftung and the Sparkassen-Kulturfonds des Deutschen Sparkassen- und Giroverbands.