Keith Tyson's monumental modular work combines over 300 separate sculptural forms into a single Field Array which he claims operates as a gigantic experiential lens for viewing some of the fundamental forces that make up reality. The show being held in the project space is dedicated to the paintings of Linda Arts. 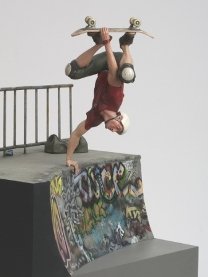 Large Field Array is named after the Very Large Array, a field of Radio Telescopes in New Mexico. The Array focuses on one spot from multiple viewpoints to give us a clearer picture of the universe. Similarly, Tyson’s monumental modular work combines over 300 separate sculptural forms into a single Field Array which Tyson claims operates as a gigantic experiential lens for viewing some of the fundamental forces that make up reality.
The individual elements are two foot squared and arranged at four foot intervals in a roughly cubic array on the floor and walls of the gallery. They range from hyper-real illusionistic sculpture through to residues of physical processes. Each sculpture is connected with all the other works within the field, and these connections are very diverse whether visual, psychological, causal, philosophical, physical or conceptual. The viewer is subsumed within this gigantic field and is forced to re-make it themselves, by tracing these myriad connections. They combine to form a lens that allows the viewer to experience the true nature of reality that they are infinite and boundless, yet connected and integrated. The work attacks the myth of individuality, and the accept concept of the unique discrete artwork. It continues Tyson’s joyful exploration of how everything in the world is connected.

The exhibition is co-curated by Anders Kold of Louisiana Museum and Hendrik Driessen of De Pont.
A major new catalogue published by Louisiana Museum and De Pont museum of contemporary art accompanies the exhibition, and includes contributions from: Dr. Jacob Wamberg, Professor of Art History at Aarhus University and an interview with Keith Tyson by Dominic van den Boogerd.

Keith Tyson was born in Ulverston, Cumbria and from 1984 to 1990 worked at Vickers Shipbuilding and Engineering. From 1990 to 1993 he attended Carlisle College of Art and the University of Brighton. In 2002 Tyson had a major solo show at the South London Gallery that travelled to the Kunsthalle Zürich, and he has participated in numerous group exhibitions including Century City at Tate Modern in 2001, and Dionysiac at the Centre Pompidou in 2005. He was awarded the Turner Prize in 2002.

The exhibition being held in the project space is dedicated to the paintings of Linda Arts (Nijmegen, 1971), of whom a large screen print, designed as a bus-shelter poster, was shown at De Pont about a year ago as part of the project Toonbeelden. Since Arts finished her training at the Tilburg Academie voor Beeldende Vorming, her work has been centered around light and space. In recent years she has produced, in addition to paintings and graphic work, a number of light installations, but she continues to regard painting as her basis and point of departure.

It is striking how narrowly Linda Arts has defined her artistic territory. In her paintings from the past three years, she makes consistent use of the same means in order to give shape to the interaction between light and space. Her visual language consists of structures of horizontal or vertical bands that are sometimes identical and sometimes vary in width. Her use of color is equally sober. Usually the works are painted in black, white and a broad range of in-between greys. Only occasionally does she employ a single color: red, green or blue. The paintings attest to the visual wealth that lies in such a ‘limited’ vocabulary.
In the works no.159 and no. 160 the surface has been divided into narrow horizontal bands that develop, via many gradations, from white to black. Despite the same landscape format and nearly identical compositions, the one work conjures up associations with light, while with the other it is in fact the deep black that strikes the eye. Due to the use of gradations of light, the vertical bands varying in width condense into cylinders in a small, square painting, and in another work the horizontal bands seem to recede like niches in a wall. Sometimes Arts applies a second pattern of lines that lies straight across the lapsing gradations of light and dark. The high gloss of the transparent varnish contrasts with the much more matte surface of the band structure applied beneath this with oil paint. Without fusing into a grid these lines, which are occasionally painted in red or green, offer a rhythmic counteraction.

‘The essence of my way of working lies in the linking of extremes,’ says Linda Arts about her work. Those extremes can be characterized as horizontal and vertical, light and dark, spatial and flat, glossy and matte, but they are also intrinsic to her way of working. The paintings are not only the result of a systematic approach, where the structure is determined beforehand, but also of intuition and amazement at what presents itself throughout the process of painting. Likewise, the works derive their expression not only from the meticulousness with which they have been carried out, but also from the small irregularities that are the mark of her own hand. Because of their subtlety, the paintings of Arts are actually not done justice by a reproduction. ‘Der liebe Gott steckt im Detail,’ [God is in the detail,] said Aby Warburg, one of the founders of art history, about a century ago. That observation applies not only to the individual works but also to the exhibition as a whole: it shows how much ‘little’ can contain.