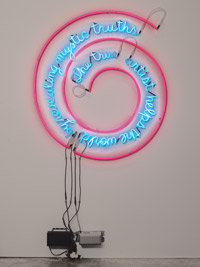 For years many extraordinary artists have combined words and images in inventive ways, calling attention to the artistic power of language and challenging audiences to rethink the interplay between visual and verbal communication. A new installation at the Philadelphia Museum of Art gathers works in which words are conceived as both communication tools and physical objects. Out of Words, the second in the Museum’s "Notations" series, highlights conceptual works from the collection, including a recent acquisition, the 30 x 30-foot installation Abraham - L'ami de Dieu (Abraham - Friend of God) by Georges Adéagbo.

The work, the title of which was inspired in part by Wallace Stevens’ 1947 poem, "Men Made Out of Words," is on view in the Gisela and Dennis Alter Gallery (176) from November 24, 2006 through April 30, 2007. From large cursive pink neon and thickly stenciled black paint to more intimately scaled printed texts and handwritten notes, these pieces, in a range of media dating from the 1960s to the present, explore the use of texts in contemporary art.

A leading artist who works in Cotonou, Benin, Adéagbo addresses history, issues of post-colonialism, intercultural exchange, and contemporary Western society from an African perspective. Abraham, L’ami de Dieu, which was first shown in New York at P.S.1 Contemporary Art Center in 2001, is made up of hundreds of objects—commissioned paintings and carvings by Cotonou craftsmen, books, record albums, magazines, and handwritten letters—arranged in many layers on the walls and floor of the gallery. Adéagbo is creating this multimedia piece anew for the Museum, incorporating found and bought objects from Benin as well as materials relating specifically to the history of Philadelphia and the Philadelphia Museum of Art. The theme of freedom runs throughout the piece, in which Adéagbo links the history of slavery and the struggle for emancipation in the United States with the French colonial experience in Africa. The title refers to the biblical story of Abraham and Sarah as we ll as to Abraham Lincoln, to whom the artist dedicates an entire section of the installation.

"With its integration of readymade objects and its direct references to Philadelphia, Abraham, L’ami de Dieu is a fitting addition to the Philadelphia Museum of Art’s contemporary art collection, and it will contribute significantly to itsgeographic diversity," said Carlos Basualdo, the Museum’s Curator of Contemporary Art.

Bright texts are visible in two neon works. The True Artist Helps the World by Revealing Mystic Truths (1967), one of Bruce Nauman’s first neon pieces, is a seminal work in his career. Hijacking a medium generally associated with shop window signs, Nauman’s work advertises a deeply personal message as if it were for sale. Joseph Kosuth’s Three Adjectives (red, yellow, blue) pays homage to Dutch painter Piet Mondrian by displaying the primary colors that make up his geometrical compositions and naming them.

Glenn Ligon’s untitled painting with stenciled letters reflects his interest in the way culture and language shape personal identity. The text moves down the canvas in obsessive repetition, its legibility diminishing with the buildup of paint. Also on view is part of a vast series of over 1,900 paintings that artist On Kawara created beginning on January 4, 1966, each of which was begun and finished on the date it declares. German artist Hans Haacke’s 1986 sculpture, Broken R.M..., criticizes the contemporary art scene. The installation of a broken shovel and a plaque, declaring in French that art and money are available on every floor, refers to works by Marcel Duchamp, inventor of the Readymade. Haacke implies that artists more eager for profit than the advancement of art have robbed the Readymade of its sting.

About "Notations"
"Notations" is a series of rotating projects presented in the Gisela and Dennis Alter Gallery (176), which serves as a flexible tool to explore contemporary art in the Museum’s expanding collection and to experiment with various exhibition alternatives. The series is named for American artist/composer John Cage’s 1968 book Notations, an international anthology of musical scores by avant-garde musicians, which also included contributions from visual artists and writers.

The Philadelphia Museum of Art is among the largest art museums in the United States, showcasing more than 2,000 years of exceptional human creativity in masterpieces of painting, sculpture, works on paper, decorative arts and architectural settings from Europe, Asia and the Americas. The striking neoclassical building stands on a nine-acre site above the Benjamin Franklin Parkway and houses more than 200 galleries. The Museum offers a wide variety of enriching activities, including programs for children and families, lectures, concerts and films.

For additional information, contact the Marketing and Public Relations Department of the Philadelphia Museum of Art at (215) 684-7860.

Selected from one of the liveliest sectors of the Museum's collection of works of art on paper, this exhibition presents mostly large, infrequently displayed contemporary art from the Department of Prints, Drawings and Photographs. Many of these objects have only been seen recently by visitors to the department’s study room and several have never before been shown in the galleries.

These works of art are on view as Department of Prints, Drawings and Photographs relocates its collection, study room, offices, and work rooms to spacious new quarters in the Ruth and Raymond G. Perelman Building.