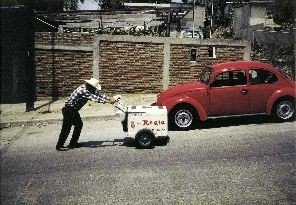 This group exhibition focuses on the relationship between artists and the city from around 1960 to the present day. The show revolves around the way in which artists perceive urban space. The emphasis is on the city as social community, on behaviour, poses, and urban rituals.

How do we experience the street? How do we behave? How do we navigate through the city? With a combination of works from the Stedelijk Museum collection and works loaned from international collections, the exhibition highlights photography, video art and installation.

Two ideas are at the heart of the exhibition: the flâneur, a type first described by Charles Baudelaire around 1850, and the activity of dérive, a practice coined by French philosopher and Situationist Guy Debord. The flâneur, a detached observer of city life, has been defined as the product of modernity par excellence. Debord describes dérive as drifting through the city without a specific destination, to re-experience the stimuli of the metropolis and the encounters to be found there.

‘Mapping the City’ begins in the late nineteen-fifties when Debord published his Theorie de la dérive (1958). Another jumping-off point is Stanley Brouwn’s famous series This way Brouwn. Starting in 1962, Brouwn started asking random passers-by for directions in getting from point A to point B. He gave each route that people drew for him the title This way Brouwn.

From the late nineteen-sixties and early nineteen-seventies onwards, many artists adopted the city as their workspace. Similar to Brouwn, themes such as walking through the city, chance, and grappling with our everyday environment are also integral to the work of Douglas Huebler. Others, like Martha Rosler, subject the metropolis to critical scrutiny. In her piece The Bowery in Two Inadequate Descriptive Systems Rosler employs photography and text to analyze the underbelly of New York society.

Life in suburbia is at the heart of the work of Dan Graham and Bill Owens. They explore topics including the individual use of mass production, the contrasts between private and public space, and the suburban lifestyle of white middle class America. Another cluster in the exhibition is ‘street photography’ by photographers like William Klein. As early as the nineteen-fifties, he had a sharp eye for the gestures, poses and behaviour of people on the street

Contemporary art
Of the contemporary artists taking the city as their subject-matter, Belgian-born Francis Alÿs is one of the most prominent. In numerous respects, his work reflects the positions of the Situationists and Brouwn. The core of Alÿs' activities revolves around the many walks he has taken through the centre of Mexico City since the early nineteen-nineties. The streets of this densely populated city are his working domain; he is the tourist, the detached observer. Alÿs’ Collection of Ephemera (recently acquired by the Stedelijk Museum) includes numerous drawings, photos, notes, maps and objects that relate to his walks in the ten-block radius around his studio in the historic centre of Mexico City.

The Heads of Philip Lorca diCorcia and the street scenes by Beat Streuli can be seen as contemporary variants of classic street photography. Their photographs capture the manifestly vacant expressions on the faces of anonymous passers-by.

‘Mapping the City’ also presents spectacular video work, such as Miami by Sarah Morris (also recently acquired by the Stedelijk Museum). This is the probing portrait of a city also known as the 'Sun & Fun capital of the States’. The film installation A Man of the Crowd by Matthew Buckingham is based on the similarly-titled short story by Edgar Allan Poe. The result is a tense mini-thriller set in the streets of Vienna. The video piece by Doug Aitken, Electric Earth, is pervaded by a powerful sense of estrangement. This overwhelming video installation projected onto eight huge screens confronts us with the modern city as though it were the remains of an alien civilization.

Mapping
After ‘Mapping the Studio', ‘Mapping the City’ is the second in a series of four themed exhibitions organized by the Stedelijk Museum over a four-year period. Each exhibition in the series highlights a different domain relating to the practice of the visual artist.

Stad en Taal (City and Language)
The exhibition ‘Mapping the City’ is a good place to start getting acquainted with ‘the city’. This is also one of the aims of the new project ‘Stad en Taal’ (‘City and Language’) that the Stedelijk Museum hopes will build bridges between students Dutch as a second language, the city of Amsterdam, and art and culture. For more information on this project, please visit http://www.stedelijk.nl/educatie or send an e-mail to: m.vangastel@stedelijk.nl.