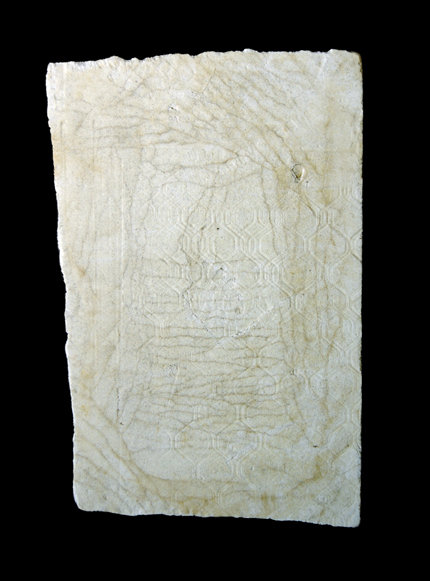 Foxy Production presents Surface Wave, a group exhibition of works by Hany Armanious, Matthias Bitzer, Ulla von Brandenburg and Louisa Minkin that taps into the tensions that lie just beneath the surface of textures, materials and forms. The exhibition explores the pressures that can erupt between abutting constructs, within the faultlines of abstraction, and in the straining for narrative.

Sydney-based Hany Armanious produces installations and sculptural forms, as well as paintings and drawings. He consistently surprises with his deft working and reworking of objects, materials, and references in order to remodel the everyday in uncannily lyrical ways. In Surface Wave he presents a urethane cast of a piece of polystyrene that he found leaning against a security fence. The indentations on the polystyrene from the fence are clearly visible, creating a sculptural piece removed from yet directly revealing its source. Armanious also presents a series of wall rubbings, pieces of sandpaper with impressions from wall surfaces that resemble vistas of far-off solar galaxies.

Karlsruhe-based Matthias Bitzer's paintings and drawings mix the abstract and the figurative, employing an aesthetic vocabulary that draws from the formal repertoires both of art-history and everyday culture. In Surface Wave, Bitzer presents a painting on raw canvas that combines geometric patterning with portraiture; a drawing on wood of ghostly ectoplasm (the spectral emanations from a medium during a séance) that ties the non-figurative directly to a narrative scene; and a lacquer on glass piece comprising a maze-like grid and series of letters that recalls Conceptual Art's critique of the image.

London-based Louisa Minkin's work is concerned with the interface between painting and text, and between object and movement. She explores the inflection of historic and contemporary technologies upon painting practice, and how surfaces reveal their history through correlation, connection and leakage. In Surface Wave she presents a video of a painting in a museum, the only movement being the reflection on the painting of the shadows of viewers; a telescope rendered in walnut; a seemingly abstract black-and white print on metal that on closer inspection reveals the silhouettes of countless figures; and an abstract painting in muted tones that hints at organic forms.

Hamburg-based Ulla von Brandenburg works in a variety of forms, including drawing, painting, film, video, installation and performance. She examines the ways in which meaning and significance can be articulated between the borders of media. In Surface Wave she presents the video Mi-Careme (2005), almost a tableau vivant where the only movement is a masked actor swaying in front of a still audience. Falling between action and stasis, the video sustains considerable tension in the way it suggests many possible narratives without allowing any to be be fully articulated.