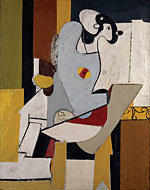 Pablo Picasso has had an enormous influence on generations of artists, from his contemporaries to today's artistic senior statesmen. Among those most affected by his work are some of the best-known American artists of the modern era, including Stuart Davis, Willem de Kooning, Arshile Gorky, John Graham, Jasper Johns, Roy Lichtenstein, Jackson Pollock, David Smith, and Max Weber — artists who directly and openly interpreted Picasso's style, appropriated his palette, or used his work as a point of departure. Picasso and American Art assembles nearly 150 pieces by these and other Americans alongside the works that inspired them, offering unprecedented insights into Picasso's pervasive impact on a country he never visited and giving viewers a rare context for viewing modern masterpieces.

Among the most esteemed American artists working today, Brice Marden tirelessly pushes the bounds of his aesthetic, producing paintings and works on paper that display remarkable elegance and lyrical beauty. This first U.S. retrospective of the artist's work explores his dynamic oeuvre in its entirety. Featuring more than 100 pieces ranging from the 1960s to the present, the presentation encompasses Marden's celebrated monochrome panels of the 1960s and 1970s and the serpentine designs produced in more recent years — plus two new paintings in their public debut. The breadth of the selection offers an unprecedented appraisal of the artist's career and showcases his inimitable ability to unite color, light, and surface.