A solo exhibition. Renowned for his large-format colour photographs charting themes of globalised society at work and play, Gursky's new production employs the latest digital technology to capture and refine an astounding compilation of detail on an epic scale. 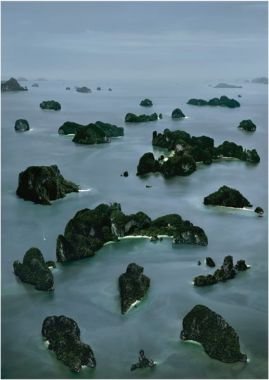 White Cube Mason's Yard is pleased to present the work of Andreas Gursky in his first major solo exhibition with the gallery. Renowned for his large-format colour photographs charting themes of globalised society at work and play, Gursky's new production employs the latest digital technology to capture and refine an astounding compilation of detail on an epic scale.

The perspective in many of Gursky's photographs is drawn from an elevated vantage point. This position enables the viewer to encounter scenes, encompassing both centre and periphery, which are ordinarily beyond reach. For the Pyongyang series (2007), Gursky travelled to the Arirang Festival, held annually in North Korea in honour of the late Communist leader Kim Il Sung. The festival's mass games include more than 50,000 participants performing tightly choreographed acrobatics, against a backdrop of 30,000 schoolchildren holding coloured flip-cards that produce an ever-changing mosaic of patterns and images. Gursky's photographs describe, in panoramic dimensions, the incongruity of the brilliant colours and smiling faces of the performers within the controlled, totalitarian nature of the event.

A chamber designed to detect the smallest known particles in the universe is the subject of Kamiokande (2007). The actual scale of the neutrino observatory in the Mozumi mine, deep below the town of Kamioka-cho in Japan, is at first glance ambiguous. Containing 50,000 tons of purified water, surrounded by thousands of photomultiplier tubes protected by metallic spheres, its immensity becomes clear as two small boats float into view at the bottom of the image, each containing a figure gazing up at the vast architecture that engulfs them.

F1 Boxenstopp (2007) focuses on the frenetic activity around Formula One cars stationed in their pits during a race. Dozens of mechanics and technicians in bright team colours surround two vehicles, hurriedly refuelling and repairing, all but obscuring the cars and drivers from view. Above this scene, members of the audience look down from the darkened interior of the hospitality suite. Shot at various Grand Prix races around the world - Shanghai, Monte Carlo, Istanbul, São Paulo - the figures appear captures in a moment of authenticity, yet in reality, such simultaneous action would not be possible; these images are in fact a carefully composed digital construct.

The rocky island peak of Khao Phing Kan in Thailand, popularly known as James Bond Island, features in James Bond Island I, II, III (2007). Soaring over the bay used as a location for the 1974 film 'Man with the Golden Gun', the view takes in a range of islands scattered in an azure ocean, with signs of human habitation just discernable. Andreas Gursky was born in Leipzig and lives and works in Düsseldorf, Germany. Since the 1980s he has exhibited extensively, including major solo exhibitions at the Museum of Modern Art, New York, Centro de Arte Reina Sofía, Madrid, Centre Georges Pompidou, Paris, MCA Chicago and SF MOMA, San Francisco. His most recent museum exhibition opened in February 2007 at the Haus der Kunst in Munich and will tour to Istanbul and Sharjah.

Andreas Gursky at White Cube Mason's Yard coincides with a presentation of new work at Monika Sprüth Philomene Magers London, 7a Grafton Street, London W1S 4EJ from 23 March to 12 May 2007.